Anecdotally, we know these truths to be self-evident – jurors find trials boring (at least many trials, after a while) and resent repetition.  Some juror notes published by Judge Christina Habas reveal how the trial’s captive audience may feel about repetition. One juror exhibited their frustration with repetition by drawing a doodle in their notes. 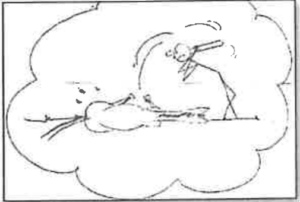 Hon. Randy Wilson, “From my side of the bench: Jury Notes” The Advocate, Fall 2013, pg. 90.  As Judge Wilson elaborated, “Jurors hate repetition. They feel it insults their intelligence and unnecessarily prolongs their jury service.”

Perhaps less anecdotal but equally telling were the survey results gathered by Federal Judge Amy St. Eve and presented at a webinar hosted by Fordham Law School.  Here is what jurors told the Judge:

The most important theme that came through on evidence presentation: do not repeat what you’re saying. The jurors really, really despise repetition, because they feel like you’re talking down to them. They feel like you think they’re stupid if you keep repeating matters over and over.

Here are some examples of what they said:

So the jurors get it. You don’t have to ask the same questions and you shouldn’t ask the same things over and over.

But wait. In his famous (if not infamous) lectures on the 10 commandments of cross-examination, Irving Younger claimed that repetition prevails:

As every trial lawyer knows, there’s a kind of informal or unwritten hierarchy of probative value.  If the jury hears it once, they might or might not believe it; if they hear it twice they probably believe it, if they hear it three times they will certainly believe it and if it is in writing nothing on this earth will persuade them that it’s not true.

So, who is correct?  Or is there a repetition “sweet spot” to strive for?

Part of the answer comes from research on what is called the “mere exposure effect.”  Studied for decades, this can be explained as a phenomenon where recognition and liking come from repeated exposures.  As to why, theories abound.  They include (1) familiarity reducing fear/discomfort; (2) habituation and satiation, the latter being a drop-off in liking after ‘overdosing’ on exposure; and (3) “processing fluency,” where a familiar stimulus is more easily encoded.

A 2017 review of nearly fifty years of research drew the following conclusion:  “Repeated exposure was associated with a more positive evaluation of the stimulus, although the magnitude of the slope was small.”  Montoya et al, A Re-Examination of the Mere Exposure Effect: The Influence of Repeated Exposure on Recognition, Familiarity, and Liking, Psychological Bulletin 2017, Vol. 143, No. 5, 459–498.

So far, confirmation for Younger.  And if more is needed, turn to research on what is labeled the “illusion of truth,” the process where people develop beliefs in assertions that are false.  It comes down to “processing fluency…[W]hen information is repeated, it is processed more fluently and is consequently perceived to be more truthful. This judgment occurs because we have learned over time that fluency (i.e., a proximal cue) is predictive of truthfulness.”  Hassan and Barber, The Effects of Repetition Frequency On The Illusory Truth Effect,  Cogn. Research (2021) 6:38,  https://doi.org/10.1186/s41235-021-00301-5.

But when does satiation creep in and turn into annoyance or rejection?  There is no precise number, but “[s]ome studies…suggest that people have the maximum confidence in an idea after it has been repeated between 3 and 5 times (Brinol et al., 2008).  After that, repetition ceases to have the same effect and may even reverse.”  Psyblog, Illusion of Truth Effect: Repetition Makes Lies Sound True, https://www.spring.org.uk/2021/07/illusion-of-truth.php (last visited October 5, 2022).

In a trial setting there may really be three issues with repetition:

The “mere exposure effect” research doesn’t purport to answer the latter two questions, and the last of the three may involve too many factors to be testable.  So perhaps the only advice can be the following:

Otherwise, leave the dead horse out of the trial.