Jurors, and perhaps people in general, are often poor at judging those whose lives and experiences differ from their own.  June’s BRAIN LESSONS wrote about one aspect of that inadequacy, what Grant told us is called “Conditional-Contrastive Inculpation”  [see https://law.temple.edu/aer/2022/06/17/brain-lessons-the-words-in-a-sentence-of-guilt/ ].  In its simplest words, we become judgmental by saying that “I wouldn’t have responded that way” or “when I am confronted with accusation X I tend to ask Y, not say nothing.” 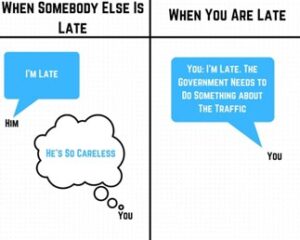 CCI has what I will call a cousin, the fundamental attribution error.  What I hope to do here is accomplish two things – expose us all to what FAE is, and start a discussion as to how one might work to avoid its deleterious consequences in the courtroom.

So what is FAE?  A dual view of the world – when something happens to me, I attribute  fault to the circumstances in which I find myself; but when something happens to or is caused by another it is due to a flaw in their personalities and character.  [A related concept is defensive attribution theory (Shaver, 1970), which describes jurors’ tendency to separate themselves from possible victimhood by being overly punitive and attributing more blame to the alleged victim.]   As one author explained FAE more formally,

[p]sychological research indicates that observers tend to hold the individual, rather than the situation, responsible for the individual’s action.20 Although people tend to attribute their own misconduct to external constraints, they tend to attribute the behavior of others to personality rather than context. Psychologists regard this tendency – variously termed the correspondence bias or fundamental attribution error (henceforth FAE) – as firmly established.[1]

And when may  this become more pronounced and more pernicious?  When the other person is truly “other” in race, nationality, or similar attribute.[2]  As elaborated in one article,

whether individuals attribute the actions of another to the situation or to disposition is influenced by whether the other is a member of their own group (the “in-group”) or another group (the “out-group”).  People tend to attribute the negative behaviors of out-group members to disposition and positive behaviors to the situation.  In contrast, negative actions by in-group members are attributed to situational influences and positive behaviors to disposition. This “group version” of fundamental attribution error is known as “ultimate attribution error” 16 and occurs primarily because individuals tend to interpret the actions of out-groups by resorting to stereotypes. [3]

Before turning to FAE and the courtroom, the why of FAE bears noting.  According to cognitive psychologist Itiel Dror, “the FAE arises because when we judge ourselves, we know much more (e.g., how we feel, what happened to us lately, our motivations, our reasoning for doing it, etc.), so we can justify/understand why we behave in a certain way. However, when we judge others, we have no such information, and we judge only based on what  we see  –their behavior. “[4]  Stated another way, “[w]hen we perceive the behavior of others, we essentially see them moving while their environment stays constant.” [5]

Litigators have not been blind to FAE, raising it in contexts such as employment discrimination litigation (focusing there not on the jury but on those in the business who made employment or promotion decisions;[6] a challenge to tele-conferencing for civil commitment proceedings based on the fear that judges will be more prone to FAE in that two-dimensional environment, ;[7]with a defense expert in a terrorism trial using FAE to explain, inter alia, how the defendant might have been the subject of government inducement,;[8] to explain why people were susceptible to fraudulent or deceptive business practices,;[9] and as a tool in evaluating a Terry stop and whether there was “reasonable suspicion” or suspicion ‘colored’ by implicit bias and FAE.[10]

But none of these decisions offers solutions to reduce or eliminate how FAE may impact  and skew decision-making.  This is where I return to Grant’s article on CCI, as the remedial steps to both may match and certainly overlap.

For Dominioni and colleagues, one ameliorative step is the restriction on character evidence found in American trials, a circumstance they contrast with European litigation where such limits are often not in place.  This at least has the virtue of removing overt personal epithets such as “reckless” or “violent” or “uncaring.”  Yet it is not much of a remedy, because character is implicit in so much of what people do and the good lawyer finds the way to tell that character story without ever using propensity terms.

Another step they propose is in encouraging discussion, which they maintain “reduces peoples’ tendency to make dispositionally oriented attributions.”[11]  Of course, we as litigators can’t be present in that most important of discussions, jury deliberations.  But good lawyers target their closings toward the jurors they identify as their standard bearers, giving them the material to make that discussion happen.  Perhaps part of the story the lawyers must convey is how the ‘other’ lives, normalizing their experiences and responses.  And all of this links back to Kahnemann’s THINKING FAST AND SLOW, taking decisionmakers out of heuristic, fast thinking responses.[12]

Sadly, what can’t be done is what science recommends – creating an empathetic bond by asking jurors to step into the shoes of the ‘other,’ a technique banned as a ‘golden rule’ argument but one shown to be effective.[13]

What may be the most effective means is eliminating the ‘otherness’ by ensuring a diverse body of decisionmakers.  That which the law intuits has been borne out by research.  As a 2019 survey of research concludes, “diversity among jurors has a positive influence on the quality of jury deliberations and verdict fairness.”[14]

The fundamentals are clear.  Lawyers must be cognizant of CCI and FAE, which in a particular case may inure to their clients’ benefit.  But where it will be detrimental, attribution errors must be addressed by creative litigation strategies to reduce anything that smacks of character or reinforces ‘otherness;’ smarter jury instructions; possibly expert testimony; or what lawyers should do best of all – taking the decisionmaker(s) into a world not their own and normalizing and legitimizing it.

[12] For those not familiar with Kahnamenn’s writing on decision-making and its relevance to lawyering, see https://law.temple.edu/aer/publication/what-kahneman-means-for-lawyers-some-reflections-on-thinking-fast-and-slow/