Do the photographs, paintings or flags in a courthouse or jury deliberation room affect how a case is decided?  That question led to the reversal of a criminal conviction in Tennessee, part of the ongoing discussion of race, racism and implicit bias that continues in the criminal justice system.  And that reversal was based in part on psychological research – proof that a negative image can create negative responses to an accused.

What was the image?  It is the “blood stained banner,” the third flag of the Confederacy.  It looks like this.

In dispassionate language common to court rulings, a new trial is required because “the Confederate memorabilia in the jury room was extraneous information and…the State failed to rebut the presumption that the petit jury’s exposure to that extraneous information was prejudicial.”  Id. But the Tennessee court did go further, rooting its decision in cognitive psychology by citing legal precedent as to the power of a symbol to affect thinking.  “’The use of an emblem or flag to symbolize some system, idea, institution, or personality, is a short cut from mind to mind.’” W. Va. State Bd. of Educ. v. Barnette, 319 U.S. 624, 632, 63 S. Ct. 1178, 87 L. Ed. 1628 (1943).  State v. Gilbert, at *53.

That flags and photographs do shape thinking and ignite biases is not merely the guesswork of a Supreme Court opinion.  It is an acknowledgement with strong scientific support.  That science was brought to the Tennessee court’s attention in the amicus brief filed by the Tennessee Association of Criminal Defense Lawyers (TACDL). The studies were described by amicus as follows:

In both studies the students’ exposure to the Confederate flag was brief. In the first study it was displayed on a screen for 15 ms (15/1,000 of second), id. at 135; in the second study a folder with a Confederate flag sticker was “accidentally left” on a corner of the desk where the students took the examination. Id. at 142.

Ehrlinger concluded that “Our studies show that, whether or not the Confederate flag includes other nonracist meanings, exposure to this flag evokes responses that are prejudicial. Thus, displays of the Confederate flag may do more than inspire heated debate, they may actually provoke discrimination.” Id. at 144.

Because the case was about the impact of visuals, it is best to conclude this column with two additional ones.  First are the graphs from the Ehrlinger article, which starkly show the findings. 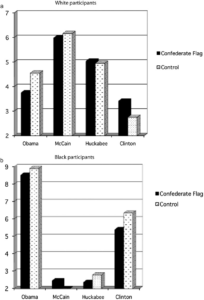 the second comes from the Amicus brief.  TACDL included more than 20 photographs of American acts of racism and terror, in many of which the confederate flag was displayed.  Included was this one from the ‘unite the right’ rally: 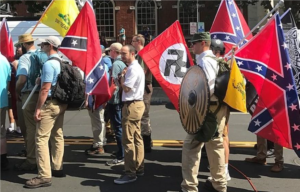 We all know that visuals aid in story-telling.  TACDL ‘showed’ its story, in that way achieving a “short cut from mind to mind.”  And science showed that how jurors think and respond can be starkly influenced by a picture on the wall – a lesson for all of us.

[Thanks are due to Tennessee attorney Evan Baddour, who saw this issue and litigated it and then kindly provided the briefs to this writer.  Mr. Baddour graduated from law school in 2018.  ttps://www.baddourlaw.com/colby-baddour/evan-baddour]