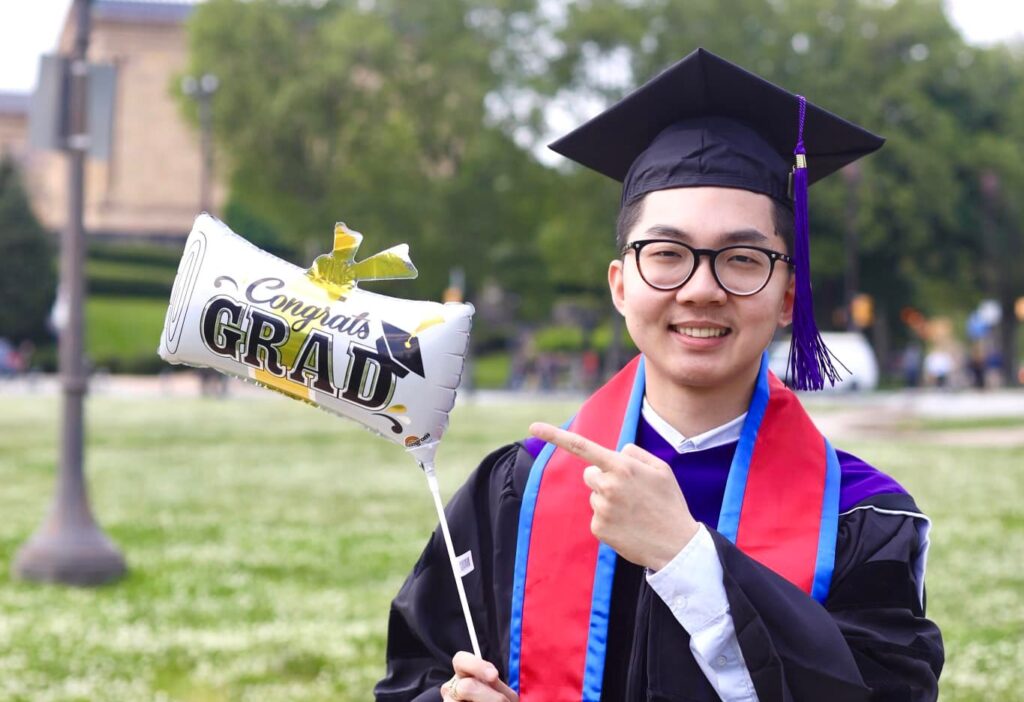 Temple Law recently caught up with Cambodian graduate Sok Kheang Chan LLM’22, who earned an LL.M. for Foreign-Trained Lawyers. Sok Kheang studied this past year alongside two of his classmates from Transnational Law & Business University (TLBU) law school in Korea, Nguyễn Nhật Minh, LLM ’22 and Bunkheng Heng, LLM ‘22. The three students made up the inaugural class of TLBU students studying in Temple’s LL.M. program as part of the recent TLBU-Temple partnership, earning law degrees from both universities.

Temple Law School: Could you describe your experience here at Temple Law?

Sok Kheang Chan LLM ‘22: Initially, studying here felt totally different than studying in Korea and Cambodia. The professors’ mannerisms were different. I felt embarrassed when people didn’t understand what I was saying but didn’t know exactly how to say it. My English was at a good level, but it really improved as I began to learn the difference between conversational language and professional language. I observed that Americans don’t care as much about grammar, so I felt relieved and better able to communicate when I focused on getting my point across instead of every perceived grammatical mistake. I was intimidated for no reason, because once I practiced, any obstacle caused by my pronunciation or accent was not as catastrophic as I thought it would be.

TLS: How did the American legal style of education influence your LL.M. experience?

SKC: I really enjoyed my classes, particularly tort law. Generally, the way professors teach students is totally different. Students engage more with the professor and are very actively listening. Back home, professors often lecture more and are less able to get students to answer questions. At Temple, before class, you need to review and prepare the written materials and then for most of the class, the professors ask students individually, calling you by name. If you’re not prepared, you will feel embarrassed, so everyone prepares! If you are unsure about something, the professors are accessible. They have office hours where once or twice per week the students can come and talk to them. In class, the professors always reminded us that they are able to help us and encourage us.

Temple Law prides itself on building a diverse LL.M. class each year. For the Cambodian native, networking and befriending Koreans, Vietnamese, and Chinese students while studying at the Transnational Law & Business University (TLBU) law school in Korea was an easy transition because of the cultural overlap among these groups. When Sok arrived in Philadelphia, he made the most of his Temple Law experience by networking among both American J.D. and international LL.M. students, as well as Cambodians in the greater Philadelphia area.

Sok found a sense of community in South Philadelphia, near FDR Park, by attending Cambodian markets, social events with other Cambodians, and searching out Cambodian food that reminded him of his home country. Sok also volunteered for the Cambodian Association of Greater Philadelphia, where he provided interpreting services and taught technology to older Cambodians.

As he settled into Philadelphia and the community at Temple Law, Sok became friends with other LL.M. students who hailed from all over the world. He sometimes missed jokes while speaking casually with American students, he said, but quickly developed the ability to speak English in a less formal manner among friends while preserving his academic English when he spoke in the classroom. As he gained confidence in his English skills, it became easier for him to make friends in the classroom or library, he explained.

What’s next for Sok Kheang Chan? He will stay in the United States for Optional Practical Training for F-1 students. He will be working as a paralegal in a law firm located in Lowell, MA.