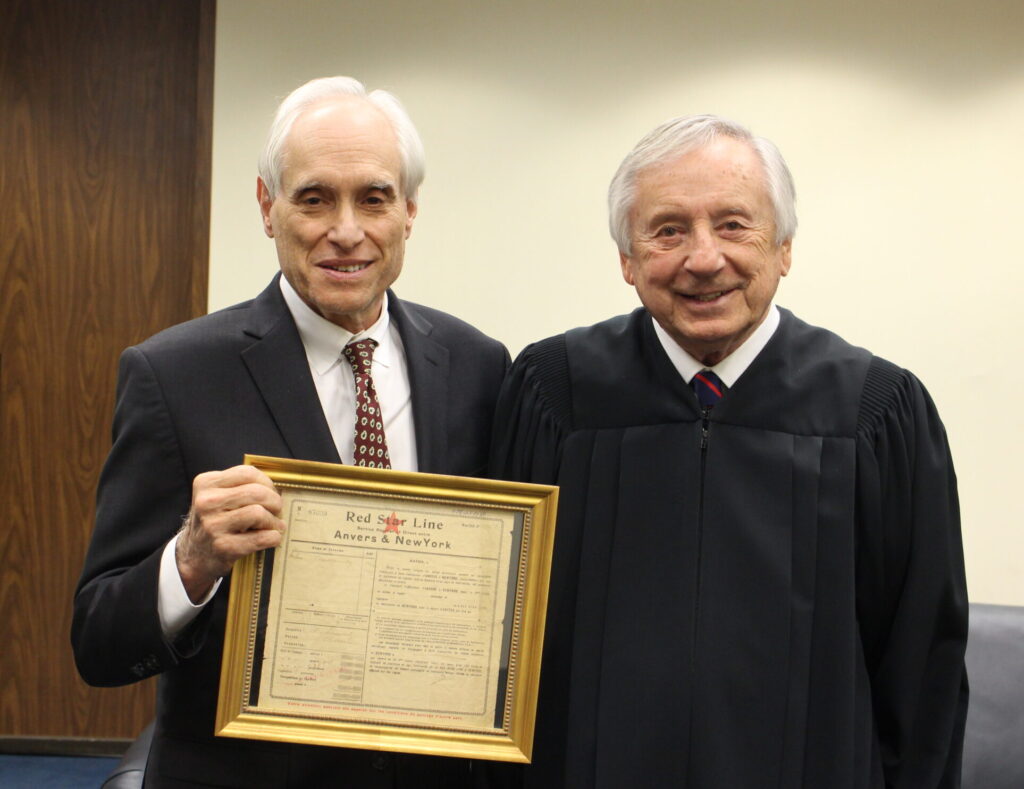 The sea of faces in the James A. Byrne Courtroom, of the United States District Court for the Easten District of Pennsylvania, hailed from 34 different countries, ranging alphabetically from Afghanistan to Vietnam. They gathered in observance of “Law Day,” a day to reflect on the role of law in the foundation of this country and to recognize its necessity for democracy to flourish, for which Professor Emeritus David Sonenshein served as distinguished guest speaker.

According to the U.S. Citizenship and Immigration Services (USCIS), in the last decade the United States welcomed more than 7.3 million naturalized citizens into the fabric of our nation. On May 2nd, in a large Philadelphia courtroom two blocks from where the Constitution was signed, it welcomed 71 more.

The presiding judge, the Honorable John R. Padova LAW ‘59, opened with welcoming remarks, congratulating the new citizens and acknowledging the great effort and risk they each took to reach this room. He commended them for making a conscious choice to become a citizen and embodying the full meaning of United States citizenship, something that, having not been bestowed upon them by birth, would not be taken for granted.

Judge Padova framed the day as a moment in “the great American experiment,” which began when the citizens of 13 colonies, hailing from many lands, with many beliefs, agreed to live together in peace as a new country. That experiment, Judge Padova remarked, continues to this day, represented in this courtroom. “We are happy to have you as part of our culture and part of our country. We hope you will feel totally comfortable and totally a part of this country,” he said.

The 71 applicants, now fully qualified for citizenship, stood for the administration of the Oath of Allegiance, followed by remarks from the Distinguished Guest Speaker, Temple University Beasley School of Law Professor Emeritus David A. Sonenshein. Sonenshein, descended from Russian-American immigrants who came to America in the beginning of the 20th century, motioned to a large screen in the front of the room. Here, on a projector, were documents from Ellis Island, proof of his own ancestors’ passage to join this nation of immigrants. He addressed the courtroom, affirming the strength of their new claim to American citizenship and reflecting on the nation’s past. Sonenshein noted that, with the exception of Indigenous peoples and those brought here against their will via the slave trade, America is and remains, a nation of immigrants.

“So what does it mean to be an American?” he asked. “Though not all my countrymen would agree, I, and most Americans believe that America has always represented hope for a better life, based on the freedom to believe what you want, say what you mean, live free from fear and have the opportunity to make your childrens’ lives better than your own.”

“You have a proud heritage both from the lands of your birth and in the accomplishments of the American immigrants who have come before you. We need your hard work, your strength, your family values and ingenuity,” said Sonenshein. He then handed the floor to Matthew S. Olesh, Esquire, who addressed the room on behalf of the Philadelphia Bar Association.

“Our country is better now that you’re a part of it,” said Olesh, adding, “Voting is a privilege – I implore you not to forsake it. Ensure your voice is heard.”

Next, on behalf of the new citizens, Raffi Marhaba, formerly of Brazil, addressed the courtroom. Marhaba fled from Brazil in imminent danger. “I finally feel like I can relax. There’s not the possibility of being sent home against my will. I feel safety. After 16 years I have the freedom of movement. I have the freedom to travel without the fear of being barred from the country.”

The beginning of a new phase of life, for himself and those seated around him, brought closure. “I am happy and proud to have shared this morning with you all,” he said.

The ceremony closed with final remarks from Judge Padova. “Along with those wonderful opportunities you now have as a citizen, we’d be remiss if we weren’t reminded of the responsibilities that go along with citizenship, that path millions of others have taken before you,” he said. “Our country needs more. A free nation, above all, requires its citizens to act lawfully and responsibility in all aspects of their daily experiences. Respect each other. Reject intolerance. And know the difference between right and wrong. My fellow Americans, the newest of our citizens, I thank you for being with us on this memorable morning.”