Is trial advocacy art, science, or some of each?  The answer is definitely the third, although the science part often gets lost in the shuffle or is alleged science with no data to back it up [think {80% of juries decide the case after opening” or “a picture plus words causes 60% fact retention”].  Finding the true science for persuasion takes some work but pays off grandly. 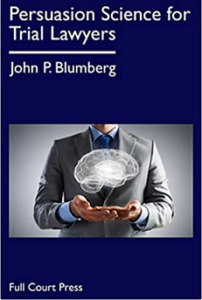 Efforts abound – trial advocacy texts now include a chapter on brain science; lecturers discuss seminal works such as Thinking Fast and Slow: and blogs on brain science, cognitive psychology and the courtroom try to fill the gap.  Words like “dopamine” and “on the same wavelength [neural coupling”] are in our vocabulary and teaching slides.  But to get a full picture, if there is but one book any trial lawyer or trial skills teacher should read this year, it is John Blumberg’s Persuasion Science for Trial Lawyers.  Reviews that begin in such a manner are often exaggerated or unreliable, but here the label fits.

Let me begin with who the author is – a trial lawyer and triple-board certified practitioner with extensive involvement in the National Board of Trial Advocacy and the American Board of Trial Advocates.  More importantly, he is a lawyer who decided to search out the science of persuasion to inform the part of trial advocacy that is, indeed, science; and he undertook this with a thoroughness that demands attention.

What does Persuasion Science offer?  After some introductory chapters it dives, deeply, into the world of psychology as applied or applicable to litigation and trials.  It begins in a place we talk about too little – collegiality and the pre-trial relationship with opposing counsel – and makes the convincing case that adversarial hostility is detrimental to securing a beneficial outcome.  Allowing the opponent to save face, and using the technique of “giving in to get your way,” are guideposts for successful negotiation, a point confirmed by recent research.  See, e.g. https://law.temple.edu/aer/2020/12/03/brain-lessons-negotiating-errors-when-the-adversarial-mindset-hurts-more-than-helps/

When it turns to the courtroom Persuasion Science is at its best and to some most unsettling.  Blumberg does not abide by all conventional reasoning – he follows the science and comes to a number of conclusions that might seem provocative if not scary.  Consider this one:

People are usually more convinced by rea­sons they discovered themselves than by those found out by others. By enticing the jurors to fill in the missing infor­mation, they will reach the desired conclusions. If you tell them, they will resist; but when they arrive at their own con­clusion, it sticks because they have persuaded themselves.

Persuasion Science, 56.  Imagine a closing argument where the advocate does not say “the evidence demands a finding of…” but instead hands that to the jurors with a soft “could those be the result of carelessness…?”

This lesson is part of a broader one about “reactance.”  The author explains this in detail, with a personal experience driving it home:

Reactance is the resistance to something that is perceived as a threat to one’s autonomy or freedom of choice. Words like “must,” “should,” and “need” are known reactance triggers. I learned this lesson during a mock trial. I was going through the verdict form and told the jurors how the questions should be answered. I had noticed that a young woman juror was paying close attention. I thought that I must have been very persuasive. Shortly afterward, while I observed deliberations on a remote monitor, I was stunned when she said, “Can you believe that douchebag plaintiff lawyer telling us what to do?”

Persuasion Science, 91.  The book is replete with more lessons, some more familiar and/or less threatening:

Added value comes in samples from arguments the author has developed.  Here is an exceptional one:

A powerful analogy might help defeat an argument that the absence of a prior accident is proof that there was no danger:

Allowing a dangerous condition to exist is like Rus­sian roulette. In Russian roulette, the cylinder of a six-shooter is spun, and then the trigger is pulled. If nothing bad happens the first five times, that doesn’t mean it’s safe. It’s only a matter of time.

Other valuable insights are found in the chapter on experts, particularly on how to transform an expert’s dry recitation of facts into the telling of a story.  And Blumberg counsels us to use juror curiosity in establishing the expert’s qualifications – asking the witness why they are able to give an opinion or otherwise assist the jury is being responsive to what jurors are asking themselves, albeit in the form of ‘so why should I listen to this person?’

These are but a few of the lessons provided by Persuasion Science, a book amply annotated so that readers can ‘go to the source.”  Use it to distinguish “empathy” from “sympathy” or to reconsider whether rapid-fire, staccato cross-examination is jury friendly or actually impedes comprehension.  It is no surprise that the book is covered with tributes – and it is a text that warrants repeated readings and a prominent place on the advocate’s bookshelf.

Information on PERSUASION SCIENCE can be found at https://www.persuasion-science.com/