More than a decade ago, the New Jersey Supreme Court wrote the following about eyewitnesses: “Without persuasive extrinsic evidence, one cannot know for certain which identifications are accurate and which are false—which are the product of reliable memories and which are distorted by one of a number of factors.”  State v. Henderson, 208 N.J. 208, 235 (2011). 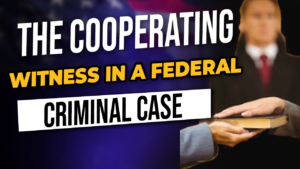 Is the same true of cooperator testimony – that without “persuasive extrinsic evidence, one cannot know for certain which cooperators are accurate and which are false—which are offering reliable memories and which are distorting the truth or fabricating entirely?

The query was prompted by this author being asked to consult for an investigative journalism project re-examining a conviction from decades ago.  The basis of the conviction?  Two cooperators, one the prototypic jailhouse informant with a gaggle of pending charges and the concomitant need to play ‘let’s make a deal;’ but the second a more complex or opaque witness, one with a criminal past but no apparent need [note the word “apparent,” a concept addressed below] to make a deal for the informant’s own benefit.  This dual cooperator case made me realize – any assessment becomes a guess absent that “persuasive extrinsic evidence.” And the trial system is poorly suited for making that assessment and trial based on guessing is not the model for fair adjudication of disputes.

Are cooperators problem witnesses?  The historic record answers the question with a clear “yes.”  And the first source is in the courts of England.  The roots of the adversary system can be traced to the problem of cooperators.  Historian/scholar John Langbein concluded that adversary trials and cross-examination were the necessary responses to the reward system that offered bounties to those who provided testimony establishing that a crime reached the severity (or degree of financial loss) to qualify as a felony and thus invited fraudulent testimony, the corrupt motive of which required cross-examination as an antidote, and “the crown witness system for obtaining accomplice evidence in gang crimes, a prosecutorial technique that created further risks of perjured testimony.” JOHN H. LANGBEIN, THE ORIGINS OF ADVERSARY CRIMINAL TRIAL 246 (2003).

What the use of cooperators in England underscored – the risk of self-interest generating false information – has been proved true in the United States.  Estimates go to over 20% as to the number of DNA exonerations that followed convictions based upon ‘snitch’ testimony.  This results from a variety of causes – the witness’ own exposure to harsh sentencing or other consequences such as deportation; a family member’s predicament; drug dependence; the need for money; mental health concerns; and the history the informant with the particular investigating officer or unit.  The need to curry favor may stem from many sources. And so too may the ‘insider information’ the witness provides – the informant may hear ‘word on the street,’ read the accused’s police paperwork in jail when the defendant’s back is turned, or learn crime details in the back and forth questioning conducted by investigators.

The court system is not the place to accurately determine which witness is truthful.  Identifying reasons that might impeach the cooperator is, first, dependent on the prosecutor fully disclosing information and on police making that information known to the prosecution.   A major unknown will be the dynamic that led to the cooperation – without mandatory audio or video recording of the police-witness interaction, one will never know how many times the informant denied knowledge or what inducements or pressures were brought to bear.  And when an information has their own open cases the result is a ‘wink and a nod’ deal – the cooperator pleads guilty to their own  – charges but the plea is “open,” i.e., one where no sentence is guaranteed and the only assurance made known to the jury is that the witness’ sentencing judge will be told of the assistance that was provided.  Jurors don’t learn of the benefits conferred by custom and practice in the particular jurisdiction – how much will the witness gain in a sentence reduction or even freedom.

The inadequacy of the courts was made clear in the trial this author reviewed.  As to one of the two witnesses, the one with no pending cases, the defense received no information as to whether that individual had a relationship with police as an informant and when questions about whether such a relationship existed were asked the prosecutor objected and the judge barred inquiry.  One may and indeed should be suspicious upon seeing the prosecutor’s objection – if the witness had no arrangement why not shout that from the skies?

And disclosure or not, the trial court’s instruction  to the jury was legal gobbled-gook that gave no guidance at all:

You should examine closely and carefully and receive with caution the testimony of any witness that you find that [sic] he has a penal interest in testifying favorably to the Commonwealth.

“Penal interest?”  Did half the jury know what that means? Contrast this to a standard instruction used in Connecticut:

“Witnesses testified in this case as informants. An informant is someone who has information regarding the crime and agrees to testify in exchange for some benefit from the state. In evaluating an informant’s testimony, you should consider the benefits that the state has promised the informant in exchange for his cooperation.

“It may be that you would not believe a person who is receiving benefits in exchange for testimony as well as you might believe other witnesses. An informant may have such an interest in the outcome of this case that his testimony may have been colored by that fact.

“Therefore, you must look with particular care at the testimony of an informant and scrutinize it very carefully before you accept it. You should determine the credibility of that witness in the light of any motive for testifying falsely and inculpating the accused.

Are there remedies, or steps that can mitigate risk in cooperator cases?  One law review article detailed a state’s attempt:

Illinois has enacted a statute that provides a potential blueprint for the type of reliability inquiry that a trial court should conduct in evaluating informant testimony.  This statute places the burden on the government to prove reliability by a preponderance of the evidence, and requires the court to consider the following factors:

(1) the complete criminal history of the informant;

(2) any deal, promise, inducement, or benefit that the offering party has made or will make in the future to the informant;

(3) the statements made by the accused;

(6) other cases in which the informant testified, provided that the existence of such testimony can be ascertained through reasonable inquiry and whether the informant received any promise, inducement, or benefit in exchange for or subsequent to that testimony or statement; and

(7) any other information relevant to the informant’s credibility.

The bottom line is simple.  Two informants, in two courtrooms, may tell equally compelling stories about the respective defendants’ admissions – and one will be telling the truth and the other fabricating.  No tool exists to tell the difference – and that is a dubious method for pursuing and attaining justice.