Everyone nowadays seems to think they are a photographer and I’m no different.  I own too much gear.  I have a website.  I watch innumerable YouTube videos about Photoshop.  The great Dorthea Lange once said, “The camera is an instrument that teaches people how to see without a camera.”  It’s absolutely true.  I see all my travels through the eye of a camera lens.  I went to Iceland once to put these eyes upon the aurora borealis.  On our first night under clear skies, my wife and I spent an hour just looking upward for any hint of something burbling in the heavens.  We were atop a large and often-photographed rock formation.  Windswept Atlantic waves crashed at the cliffs to the south while our eyes were fixed to the north.  With no light pollution to speak of, there was so much to see overhead.  The Milky Way seemed crisper at its edges.  Venus and Jupiter were paired-off to our west like lovers watching and waiting for the same display.  Meteors flickered in and out with the rarity and stealth of winter fireflies.  We kept looking up.  Finally, she emerged in green robes from her darkened closet of the north sky.  What a beauty.  My head slowly tilted backward as the aurora came toward us, booming over us and around us as if its lights were the manifests of a deafening sound.  My wife burst into tears.  You could have whispered any incredible lie about the cosmos to me in that moment and I’d have believed it.

We “look up” to both the heavens and our heroes.  We seek permissions from authorities above us.  We climb mountains to find sages.  We make appeals to a higher court.[1]  We are inclined to the inclined.  Would it be possible to leverage these spatial truisms into jury verdicts?  Can we get a jury to believe what we want them to believe just by getting them to look upward? The thought actually isn’t so out of this world.

A trio of researchers tested the influence of an upward gaze by having participants make judgments on subjective and objective matters, changing the level of the computer screen on which advice about those judgments appeared.  The methods were complex, so I will simplify them a bit for the space we have here.[2]  Participants looked first at a level computer screen and were asked to make guesses on the weights of various on-screen objects.  They were also asked to rank, by importance, seven attributes one would consider when looking at applicants for a given internship.  Three of those qualifications were considered subjective (“attire, interest, nonverbal behavior”) and four were considered objective (“grade point average, knowledge of project, prior relevant coursework”).[3]  Participants recorded their answers on paper and were then asked to change computers where they would answer all the same questions again.  The second computer monitor, however, was positioned either below, at, or above the subjects’ eye levels.  On the second monitor, elevated or not, participants were shown answers to the same questions from some other hypothetical, previous participant.  All of this was conducted under the pretense that researchers were testing office-space ergonomics. Would those participants who saw answers from previous participants be swayed by those answers if this new information appeared above their eye level?  As it turns out, yes.  “[P]articipants gazing upward were significantly more likely to accept the answer of the ‘previous participant,’ compared with participants gazing straight ahead or down.”[4]  Interestingly enough, an upward gaze at the “advice” of other participants affected the subjective judgments, but did not work to change participants’ views of the objective job-interview qualifications.[5]  The idea there being that the subjective guesses dealt with greater uncertainty and uncertainty was more likely to make a participant more susceptible to other influences.[6]

The researchers point out that this study didn’t attempt to gauge the durability of the effects on the participants.[7]  Thus, there isn’t enough data for the trial lawyers present to have confidence that upwardly presented information during closing argument will impact deliberations days later.  Even so, is there really any harm in using that drop-down screen or in making that exhibit easel a little bit taller?  As I raise my eyes upward and stroke my beard in contemplation, I don’t see any harm in it.

Plato said, “Astronomy compels the soul to look upwards and leads us from this world to another.”[8]  As I think back on looking up at the greatest heavenly display I can recall, there is something that feels like it has changed within me.  Oh, this thing doesn’t have to be so weighty or magnanimous.  Perhaps the change need only be as simple as recognizing that sometimes the words “space” or “sky” are poor substitutes when the word “heavens” is the richest descriptor.  Let’s all take some time this month to stare upward at the stars, away from the glare of city lights.  We can go visit that uncle of yours who farms corn on the plains of western Iowa.  It’ll be good for us and he’ll be happy for the visit.  “Space” and “sky” will leave our mouths as quickly as our winter breaths and, looking upward, it’ll be “heavens” for me and you from here on out. 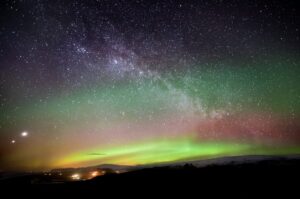 [8] I admit I don’t know who authored this translation, but it’s a nicer version than my copy of The Republic which says, “In my opinion it’s plain to everyone that astronomy compels the soul to see what’s above and leads it there away from the things here.”  The Republic of Plato 208 (Allan Bloom trans., Basic Books 2d ed. 1968).