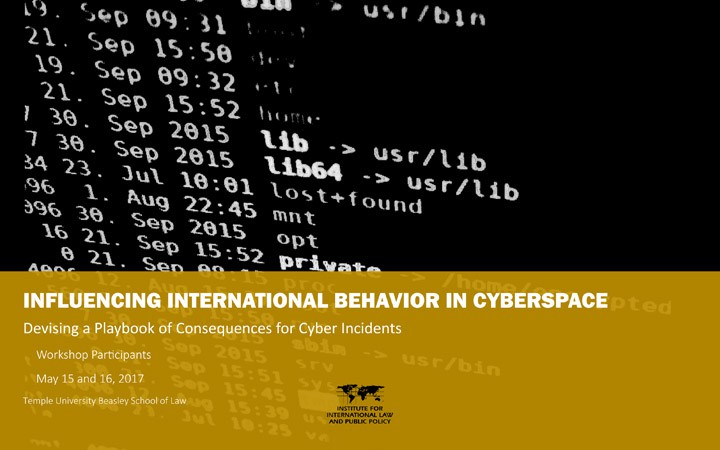 Temple Law School played host in early May to a small, high-level working group of experts from disciplines as diverse as economics, technology, international relations, government, and national security. Their mission: over the course of two days to write a “playbook” for imposing consequences on states who engage in unwanted cyber-behavior.  Temple Law Professor Duncan Hollis and Leiden University researcher Dr. Eneken Tikk organized the event, which was co-sponsored by Temple’s Institute for International Law and Public Policy and Leiden University’s Institute of Security and Global Affairs.

Professor Hollis described the workshop, which was held under Chatham House rules, as a “thought-exercise” designed to bring together senior officials from the State and Defense Departments as well as the Office of the U.S. Trade Representative with academics, technical experts, and social scientists to collaborate on a playbook, or menu, of “pre-positioned” consequences for unwanted cyber-behavior by a state actor. “What we’re trying to address is that range of unfriendly behavior by a state actor that goes up to, but doesn’t cross, the line into cyber-war,” he explained. Participants focused their attention on tools that that would be transparent and could be carried out by a multilateral coalition as non-escalatory deterrent strategies, done “more in sorrow than in anger,” as characterized by one of the experts present.

Hollis noted that the workshop is exemplary of Temple Law’s commitment to being a space where experts can come together across disciplinary lines to tackle real world problems. “Temple Law has long recognized the value in events like this, events that aren’t limited solely to legal or academic inquiry. The real world is a lot more complicated than that, and the best way to teach our students how to have an impact in such a complicated world is to be the place where that impact can be made.”

Dr. Tikk added that the newly established Cyber Norms Platform at Leiden University focuses on policy-relevant studies of State practice and works with partners globally. She noted that State action against unwanted cyber-behavior is a way to uphold and develop international law and policy. “Many countries would be likely to follow the US expertise and lead in this area”, she said.

Working papers presented and discussed during the workshop will be collected in an upcoming symposium issue of the Temple International and Comparative Law Journal.

Founded in 2002, the Institute for International Law and Public Policy has set the pace for Temple Law’s rise as a global leader in the study of international law. Under current co-directors Peter J. Spiro and Jaya Ramji-Nogales, and with the energetic support of a strong core of Affiliated Faculty, the Institute sponsors an ambitious menu of activities. The Institute has been a core element of the rich international programs at Temple Law.

Institute of Security and Global Affairs

The Leiden University Institute of Security and Global Affairs (ISGA) in The Hague focuses on multidisciplinary research and education within the international scientific field of security studies. The Cyber Norms Programme focuses on development and implementation of cyber norms in scholarly thought and State practice.