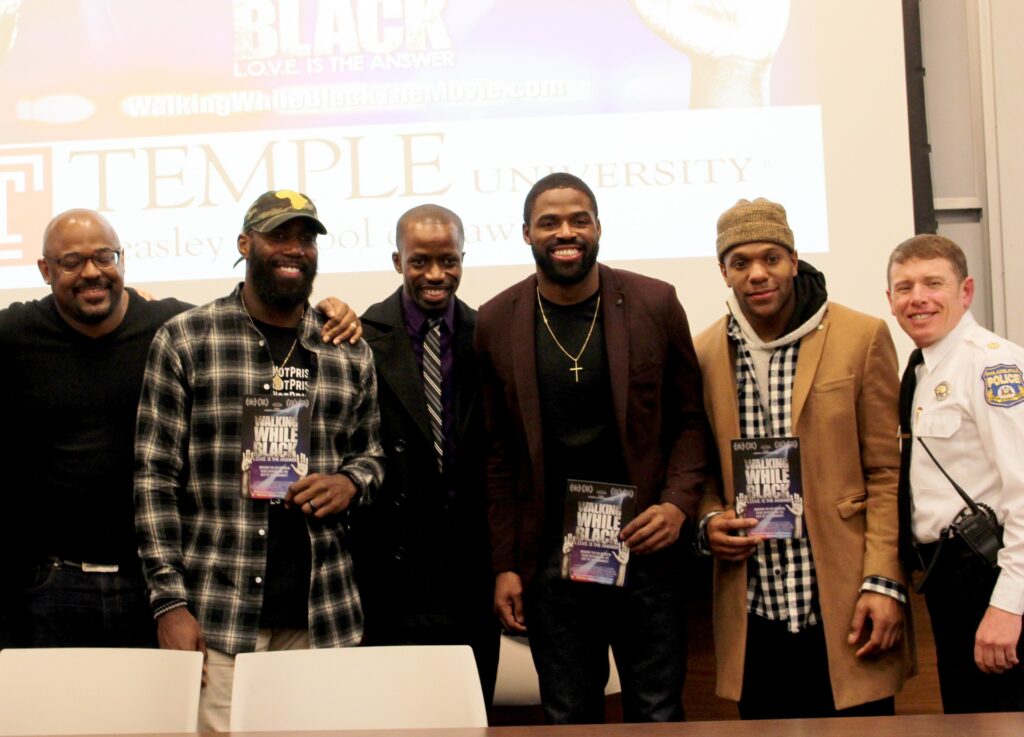 On an evening punctuated by bitter cold and snow driven sideways by gale force winds, Temple Law School played host to an extraordinary gathering of professional athletes, law students, filmmakers, Philadelphia Police, and advocates for racial justice. On the agenda was a frank conversation about racial justice and law enforcement, framed around a screening of Walking While Black: L.O.V.E. Is The Answer, after which Professor Jules Epstein moderated a discussion led by panelists Errol Webber, co-producer of the film; William Cobb from the ACLU’s Smart Justice campaign; Commander Mike Cram of the Philadelphia Police Department; and Malcolm Jenkins, Torrey Smith, and Rodney McLeod of the Philadelphia Eagles.

Jenkins and Smith are members of the NFL Players Coalition, of which Jenkins is also a co-founder. Epstein began the conversation by asking them what was important about the film and the discussion to follow. Both players emphasized the need for dialogue and the responsibility of anyone with a platform to “be part of the solution.” McLeod, who has participated in “listen and learn” ride-alongs with police officers, added: “This movie showed me that we have a lot to learn from one another, and that there is a lot of pain and trauma on both sides. It starts with me – this conversation will be very beneficial to our youth. Hopefully, we can make it better.”

“It’s important to show this film because the culture of policing is toxic,” said William Cobb of the ACLU’s Smart Justice campaign, “so communities don’t want to work collaboratively with law enforcement.” Cobb in particular noted the power imbalance and lack of accountability that can leave many community members vulnerable to misconduct by police. “I’ve been robbed twice in my life,” he recalled. “Both times were by police officers.”

Commander Cram of the Philadelphia Police Department, who describes himself as a “community activist,” acknowledged later in the evening that a legacy of such misconduct exists. In addition to greater police accountability, he said, he was a champion of community leadership in partnership with police, noting that “neighbors take back neighborhoods, not the government.” Cram spoke passionately about the relationships he has built with members of the communities under his purview and about his belief that addressing basic human needs is as necessary to community policing as more traditional law enforcement strategies.

The Players Coalition was founded in January 2017, and is currently focused on three areas: criminal justice reform, juvenile life without parole, and bail system reform. Epstein noted that there is a “tremendous history of African American athletes, generation after generation, stepping up,” and that the Players Coalition has inherited that mantle.  “We have the opportunity to bring people together and open doors to people who wouldn’t otherwise interact,” said Jenkins.  “But we’re also black men in America who live these things.” “We’re not just entertainers,” added Smith. “Athletes are told to keep politics and religion out of sport. But we show on the field every Sunday that unity across religions and colors and backgrounds can exist.”

Walking While Black: L.O.V.E. Is The Answer

Walking While Black: L.O.V.E. Is The Answer illuminates, through powerful narrative interviews, the experiences – deeply painful and traumatic, and ultimately transformative – of individuals impacted by racial profiling by law enforcement officers, including several officers who spoke of the pain and trauma they have experienced on the job. It was inspired by an accumulation of encounters with police experienced by co-producer A.J. Ali and presents a strategic solution he says came to him as an “aloha moment” on a Hawaiian beach: L.O.V.E., which is an acronym for:

“It isn’t enough to sit and watch this film without changing after seeing it,” said co-producer Webber. “We must also engage in dialogue, in community, in learning and practicing L.O.V.E.” Jenkins agreed: “It’s about changing individuals. Every single person in this room has a responsibility to play a part.”

It was quickly apparent from the Q&A that followed that the film had left its mark on everyone in the room. The conversation among panelists and audience members was frank and personal, and tackled everything from how to maintain hope that solutions are possible to whether dialogue can be productive in the context of such stark systemic inequality. It was, ultimately, a reminder of the potential for the law to uplift the communities it was created to serve and of the many ways in which it still falls short.

Which is why, Smith drove home, it was important to make the trip up Broad Street on a wild winter night to talk about this film with a group of Temple Law students. “We’re here because you all are future leaders,” he said. “We’re leaders now, but your time will come.”