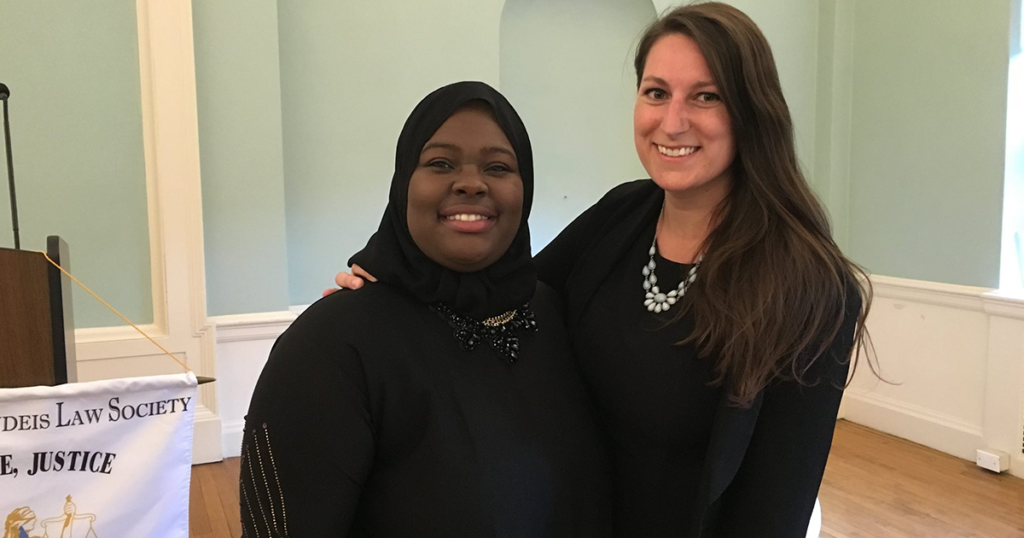 Davis, who is a rising 2L, received the Judge Sandra Mazer Moss award, given each year to a single parent law student who strives for personal achievement, success, and excellence in the law. In addition to being a student in the evening division and raising her children, Davis works fulltime at an agency devoted to securing grants from the Department of Labor and the Department of Justice to serve impoverished youth ages 14-24. “I was most fortunate to meet Judge Moss while presenting in my Introduction to Transactional Skills class,” she writes. “After some general conversation in which we both talked about attending law school while being a single parent, I was not only amazed but inspired.”

Thompson, who is a rising 3L, received the Mayer Horwitz, Esquire Scholarship award, given each year to a Jewish law student with an interest and involvement in community service. Thompson is the creator of Between Borders: A Refugee Simulation Experience, as well as the president of the Temple National Lawyers Guild and Student Public Interest Network. Thompson cites her upbringing in Mexico and her Jewish heritage as “sparking (her) passion for fostering generosity and fairness for those who are treated as an ‘other.’” “My commitment to service,” she writes, “is based on the core Jewish belief of welcoming the stranger. This belief serves as my guide to finding mutual understanding with every human being and aligns with my devotion to ensuring equal and adequate rights for immigrants and refugees.”

Named in honor of Justice Louis D. Brandeis (1856-1941), the first Jew to serve on the United States Supreme Court, the Brandeis Law Society is “rooted in deep Jewish traditions and values. As it is written, ‘Justice, justice shall you pursue.’ …. In accordance with these words, the Talmudic tradition of Tikkun Olam – ‘repairing the world’ – and the principles of upholding the rule of law in a just society, we aim to serve our members, the legal community, and community at large.”