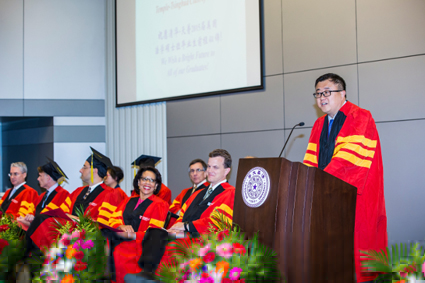 Editor’s note: The following is a translation of an article that was first published by Tsinghua Law School.

During the ceremony, Vice President Yang Bin delivered a speech, in which he encouraged the graduating class to heed President Xi Jinping’s comprehensive call to promote “the rule of law” and to let those words always guide their thinking.  He also told them to keep the University’s motto firmly in mind as they “exert themselves in the utmost” to contribute to legal reform and the internationalization of China. Soon afterwards, Temple University Vice President Michael Gebhardt, Dean of Temple Law School JoAnne Epps, and Dean of Tsinghua Law School Professor Wang Zhenmin each delivered remarks and wished the graduating students great success in their careers. Class representatives, Mao Jialing (PRC Ministry of Justice) and Luo Yan (legal adviser) encouraged their classmates to vigorously apply what they have learned, to pursue excellence, and to show their gratitude to Tsinghua and Temple by putting their training to good use. Honored guests also included former Dean Emeritus of Tsinghua Law School, Professor Wang Chenguang, and American and Chinese professors from the Temple-Tsinghua Program.

Cooperation between Temple University and China can be traced back to Deng Xiaoping’s historic visit to the United States at the beginning of 1979. It was then that Deng Xiaoping accepted an honorary doctorate conferred upon him by Temple University. Deng said that it was not only a personal honor for him to receive the degree, but that it was also a symbol of friendship given by the American people to the Chinese people. This gesture opened the door to legal exchange between the two nations.

At a joint leadership summit in 1997, President Jiang Zemin and President Clinton affirmed their commitment to working towards legal reform and the rule of law for the benefit of both nations. For China, these reforms were crucial to fully participating in the world economy. Considering their history of friendship, China invited Temple University to establish a legal training program in Beijing. In 1999, Temple University became the first foreign University to gain approval to issue LL.M. degrees in China. To this day, this program remains China’s longest-running joint legal program. Through the support and leadership of Tsinghua University, the Supreme People’s Court, the Supreme People’s Procuratorate, and the State Administration of Foreign Expert Affairs, this program has been running successfully for over 16 years.

The Tsinghua-Temple Master of Laws Program has so far trained over 636 graduates who have deep knowledge of both the Chinese and American legal systems. The program has also trained over 1,358 Chinese legal professionals on a short-term basis. No matter if they are working to enforce the law in the public sector or are on the front lines of commercial practice, Tsinghua-Temple alumni hold a number of important posts and are all enthusiastically making prudent contributions to the modernization of the Chinese legal system. They have attained many extraordinary achievements and have won public praise. It is because of this that the program has maintained the support of students and their families, as well as from many different government circles.

Photo: Tsinghua University Vice President Yang Bin at the graduation ceremony delivering a speech, in which he encouraged the graduates to make contributions to legal reform in China.