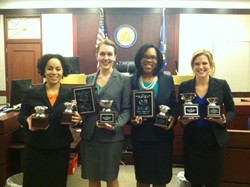 This past weekend, Temple’s National
Trial Team defended its Region III championship of the National
Trial Competition at the Criminal Justice Center in Philadelphia.
It was Temple’s 26th regional championship in 28 years of
competition.   The members of the championship teams are
Emilia McKee Vassallo and Caroline Power; and Britt Walden and
Michelle Ashcroft.
In gaining its 13th regional sweep, Temple defeated 20 teams
from 11 law schools in DE, NJ and PA.  Britt Walden and
Caroline Power were awarded the John J. Scott Memorial and Bernard
L. Siegle Plaques as “Best Advocates in the Final Round.”  The
presiding judges were the Hon. Lawrence Stengel and the Hon. David
Strawbridge of the Eastern District of Pennsylvania.
The Team travels to Texas on March 26 to compete for the
National Trial Championship against the 22 winners from the 11
other regional contests.   The teams are coached by Professor
Jen Bretschneider, Director of Experiential Programs and Trial
Advocacy Programs and  Alex Gosfield ’08, an ADA in Chester
County.
The tournament was sponsored by Temple’s LL.M. in Trial
Advocacy Alumni Association and the Pennsylvania Innocence Project
(PIP) and directed by Professor Marissa Bluestine, Director of PIP.
It was administrated by Mary Beth Wilson.