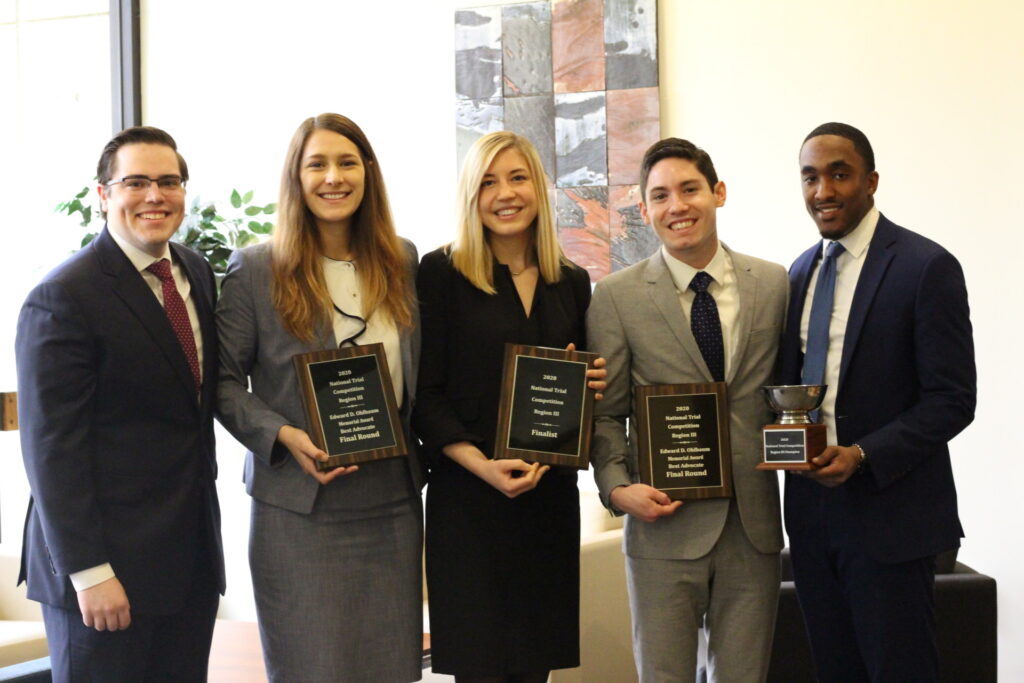 Editor’s update: Following the publication of this article, the National Trial Competition, scheduled for early April, was cancelled due to the COVID-19 pandemic.

The National Trial Team earned the right to represent Temple Law School at the National Trial Competition in Texas in April after commanding performances by two Temple squads at the Regional Trial Competition, held in Philadelphia at the end of February. In addition to the team successes, 3Ls Dominique Montoya and Nicholas Guth were each recognized with the Edward Ohlbaum Best Advocate Award for their final round performances.

Both squads dominated in every round on their march to join the final four. The team consisting of 3L Dominique Montoya, 2L Lauren Doig, and 2L Andrew Marth won every single preliminary round and in each round won every single judge’s ballot, finishing as finalists against teams from 11 other law schools. While acknowledging that the outcome wasn’t everything they had hoped for, Montoya expressed confidence that their Temple training had prepared them well: “Temple’s philosophy has always been to mold us into trial lawyers, ready for real life practice,” she said. “That’s how we approached this past weekend; not as a competition, but we treated each round as a trial for our client. Even though the outcome was disappointing, our team displayed an unparalleled level of zealous advocacy and seamless teamwork. All thanks to our coaches and to the community of Temple Law that pushed us there. I’m so proud of our performances and I wouldn’t change a thing.” “I feel so lucky that some of the best trial lawyers and advocates in the country give up so much of their own time to develop law students into strong and confident advocates,” echoed Doig. “It’s truly an experience that cannot be replicated.”

The second Temple squad, consisting of 3Ls Nicholas Guth and Justin White, went all the way, winning their final trial and earning the right to represent Temple at the National Trial Competition in early April. The victory was particularly sweet for White, whose 2019 squad also made it to the RTC finals but fell short. “This year’s championship win couldn’t have been better written. Last year at RTC my team lost in the finals,” White recalled. “It was heart-breaking because of how hard we worked to get there. But I knew we would be back and better this year. During the tournament this year our first round started out a bit rough, but we shook it off and swept all our competitors to make it to the finals. Where, just like any great storybook ending, we met the same team that beat us last year. This time the only thing on our mind was redemption, and that’s exactly what we got! It was so exciting and fulfilling. Then, having our teammates dominate the competition in their bracket, and sweeping every team to the finals was amazing! We were really a complete team and I couldn’t be more proud.” Guth, who like Montoya and Doig credited the support of teammates, coaches, and the broader Temple Law community, was thoughtful about the lessons he’s learned as a member of Trial Team – including the potential for advocacy to be fun. “I learned a lot as a competitor – namely how important it is to be authentic and professional,” he said. “Jurors are keenly deft at picking out phonies, and our coaches, Jules Epstein and Marissa Bluestine, taught us how to be ourselves in the courtroom and win. They were also, and still are, amazing role models. My takeaway: have fun, be yourself, and you will be successful.”

White, a natural storyteller, was also reflective after the win. “Three years ago I visited Temple Law for the first time,” he recalled. “I walked into Klein, and the first thing I saw was the Trial Lawyer Hall of Fame. From that moment I knew this was the law school for me. Then as we walked the hall of the 6th floor, lined with seemingly countless mock trial trophies, I knew this was a tradition I wanted to be a part of. Having the opportunity to compete for Temple’s Trial Team at the highest level has easily been the most rewarding experience. From the outstanding coaches, to the talented teammates, and the valuable hands-on skills, nothing compares …. I just thank God for this amazing opportunity, and we are focused on the next challenge ahead.”