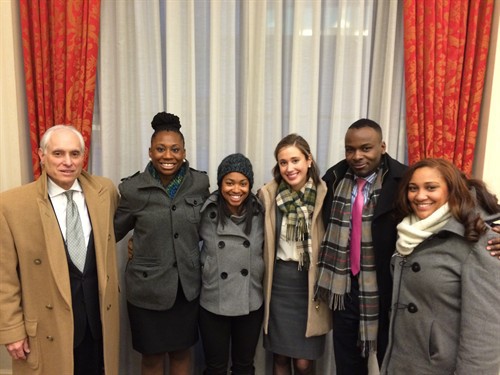 The Temple Law National Trial Team took top honors at the Region III championships this past weekend, and will once again send a team to Texas for the National Trial Competition in March. Third-year law students Charmane Martin and Lauren Stram will represent Temple at the tournament in Houston against the 22 winners from the 11 other Regions across the country. Temple’s two teams were coached by Professor David Sonenshein, Carrie Cinquanto, Esq. and Maureen McCartney, Esq.

The National Trial Competition, considered the “Super Bowl” of mock trial tournaments, brings together the top trial teams in the country. Temple’s record in the tournament is unmatched: in addition to winning 21 consecutive (and 27 total) Region III championships, Temple has placed in the Elite Eight a record fifteen years in a row, including three national championships and three finalist finishes.

In defending its Region III title, the Temple Trial Team defeated 19 teams from 11 other law schools in Pennsylvania, New Jersey, and Delaware. Both Temple teams competed in the Final Four, with Stram and Martin moving on to the national round and the team of 3L Victoria Miranda, 2L Joel Michel, and 2L Tiffany Sykes finishing as Finalists. Interim Director of Advocacy Programs David Sonenshein commended both teams, remarking that, “the students advocated with the excellence, ethics, and professionalism that comes from a Temple Law education.  We could not be more proud of the teams.  Having both teams compete in the Final Round shows the breadth and depth of the Advocacy Programs. We recognize that this is the first step to Texas and look forward to March.”

Sonenshein continued, adding that, “this victory marks the 27th time in the last 29 years that Temple Law has won Region III. That fact, and Temple’s second Top Gun (top student advocate in the country) triumph in 2014, say a lot about Temple’s continuing primacy in trial advocacy, not only in this region, but throughout the United States. Temple’s advocates continue to raise the bar not just for these competitions, but for their readiness to hit the ground running and practice law.”

For student advocate Charmane Martin, Trial Team has been about developing the skills and the confidence to walk into any courtroom and know that she can win. “Trial Team trained me to be a real attorney,” remarked Martin. “First, the skills. While we worked with fake cases, our coaches always added a real world twist to it so that we could understand how we would deal with a particular case if we were really prosecuting or defending. Second, the confidence. The confidence comes from Trial Team because we are taught to believe in our instincts, and we practice enough to know almost every possible theory that may come our way. Because of that, there will never be a day when I walk into a courtroom and won’t feel confident that I know my case in and out, my theory, and that I will be able to persuade my jury.”