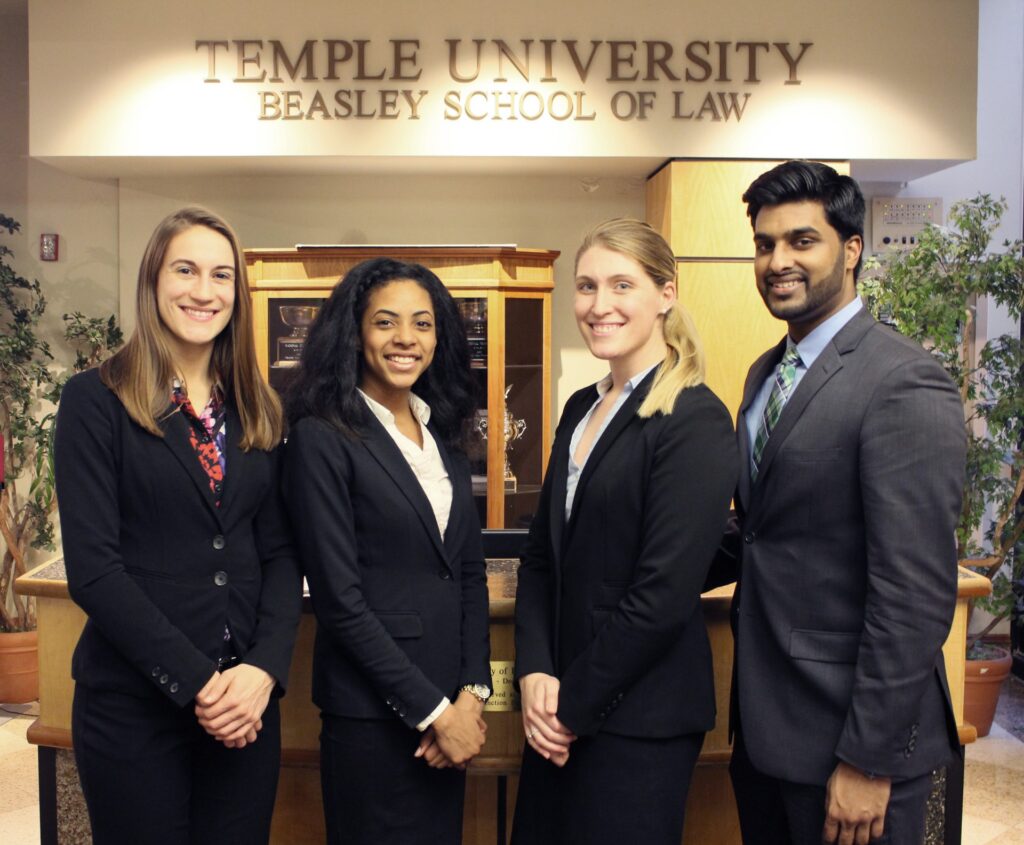 The National Trial Team continued its tradition of excellence in advocacy at the 2017 National Criminal Justice Trial Competition, bringing home quarter-final honors and finishing in the top eight among the twenty schools invited to the national competition. Third-year law students Amanda Capaldi, James Mathew, and Alison Neveil and second-year law student Gabrielle Green traveled to Chicago where, says coach Jennifer Bretschneider, their hard work and commitment to one another was on full display.

“This team was really special,” remarked Bretschneider, “in the way they prioritized not just hard work but team work. Their commitment to one another was tangible. I’m incredibly proud both of the effort and the character they showed.”

Alison Neveil, who will work next year for the Philadelphia District Attorney’s Office, agreed. “It’s amazing to see how much we all grow each semester on trial team,” she remarked. “Having the opportunity to work with different coaches and teammates for each competition has taught me the importance of collaboration and preparation.”

Teammate James Mathew hopes to practice criminal defense next year. For him, the increased responsibility as a graduating senior was accompanied by the knowledge that his role on defense in this competition could translate directly to his work after graduation. “By working on defense for this trial, I was able to see exactly what it would be like to try cases on the defense side,” he said. “We had no burden and had to remind the jury of that. Additionally, I had a motion for a judgment of acquittal on the basis that the prosecution couldn’t meet its case. In real life I’ve seen these motions, how they work out, and how you can win a trial right then.”

For both the future prosecutor and the future defender, trial team also shaped what may become the most important trait of all: confidence. Neveil summed it up: “This semester, at the John Marshall Competition, I saw the importance of confidence in the courtroom during our quarterfinal round. Being sure of myself, while adapting in the moment, is just one of the many skills I am proud to take with me into the ‘real world’ upon graduation.”

The National Criminal Justice Trial Competition, held annually in Chicago, Illinois, is co-sponsored by the Criminal Justice Section of the American Bar Association and The John Marshall Law School. The Temple Law team was coached by Professor Jennifer Bretschneider and Assistant U.S. Attorney Maureen McCartney, with special assistance from the director of Temple’s LL.M. in Trial Advocacy Program, Barbara Ashcroft.