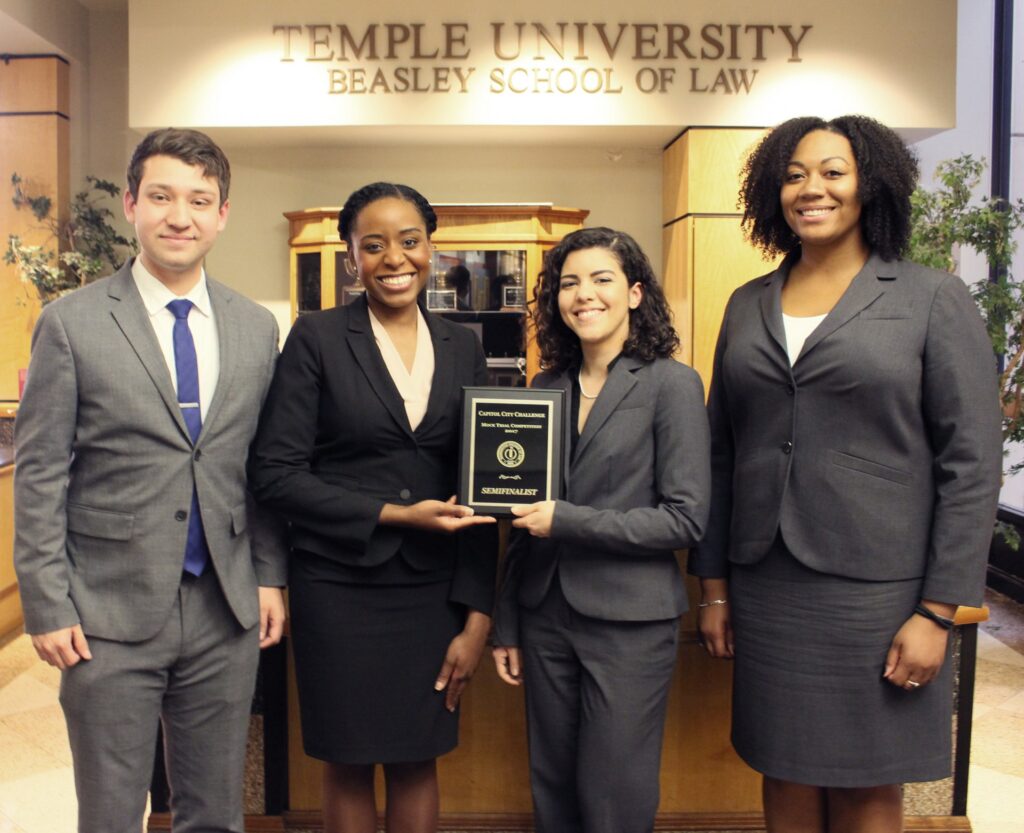 The advocacy skills and competitive tenacity of the Temple National Trial Team were on full display in Washington, D.C., as the team fought their way to the final four and came away from the national tournament with semi-final honors. Third-year law students Jorge Garcia, Daryll Hawthorne-Searight, and Jasmine Peele and second-year student Emily Diaz represented Temple Law, with coaches Ben McKenna LAW ’13 and Susan Ricci at the helm.

McKenna praised the team for their dedication and competitiveness, noting how well their hard work through the semester had paid off. “All members of the team worked incredibly hard to improve their skills throughout the semester and clearly demonstrated their desire to win,” McKenna remarked. “They were focused during practice and honed their skills during their free time to make sure they were as prepared as possible.” As a result, “All the students were strong advocates, winning their first 14 ballots to start the tournament.”

The admiration between teammates and coaches was clearly mutual. “Our coaches, Ben McKenna and Susan Ricci, were the most dedicated coaches I’ve ever had,” said team member Daryll Hawthorne-Searight. “I just regret not being able to have them as coaches again! Ben has been my coach twice and I cannot express enough gratitude for the dedication he showed both seasons.” Jasmine Peele agreed. “Trial Team teaches you to be a better advocate, but my coaches this semester taught me to be a better lawyer,” she said. ”During the competition we were thrown a lot of curve balls that forced us to make critical judgment calls in the moment, which I feel is the most representative of what lawyering in the real world is like. Ben and Susan did an excellent job of preparing us for anything that was thrown our way, and I don’t think we would have gotten as far in the competition as we did without their exemplary coaching skills.”

Jorge Garcia remarked on the confidence he’s found through competing on Trial Team. “At the Capitol City Challenge, I had the opportunity to learn and compete against some of the best advocates in the country. I felt confident in my ability to perform well at the tournament because my coaches and teammates pushed me to be my best. The experiences that I have had as a member of the Temple Trial Team will be something I treasure for the rest of my life,” Garcia said. Hawthorne-Searight, who will start her career as a Patent Litigator in September, agreed, adding, “Trial Team has been my most influential experience in law school. I’ve been on the team for two years and each year was a learning experience. I recommend Trial Team for anyone who wants to see themselves become a great litigator, and do it with a talented group of peers.” She continued, “Cap City was an amazing experience and I couldn’t have picked better teammates. Every single one of us gave it our all. I got to watch all of us grow and improve over the semester, and we went to D.C. and showed them what we were made of— Temple Pride.”