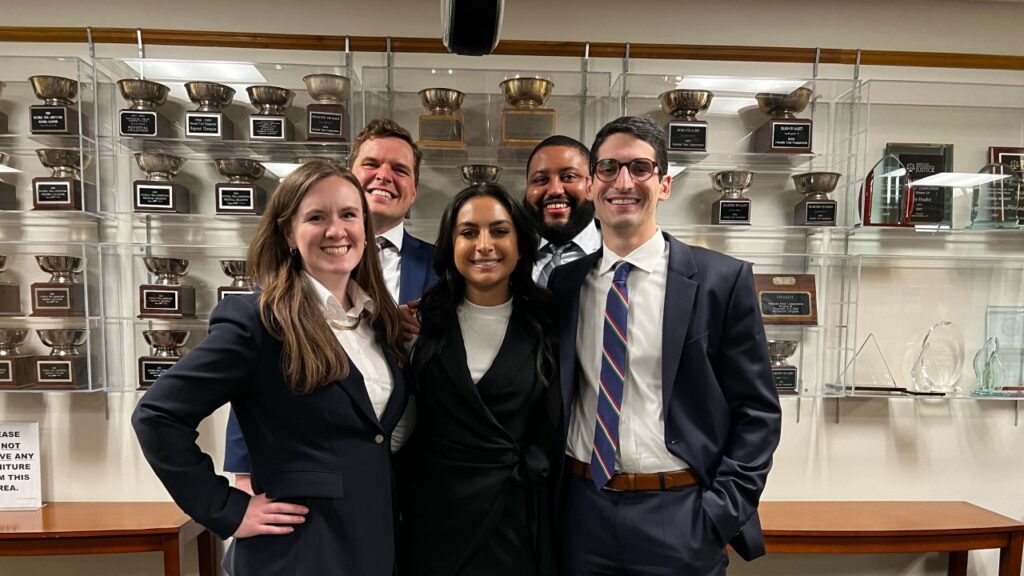 The Temple Law team won five consecutive trials during national rounds, emerging through the elimination rounds, quarter-final, and semi-final rounds before losing the final to the UCLA School of Law. The team displayed incredible skill and resilience, marking the first time in over a decade that Temple Law progressed to the national rounds of this competition.

“Although flipping to play both sides for Temple’s team proved to be a demanding task, it gave me the opportunity to work closely with all our student members and apply the well-rounded advocacy that Temple has taught me,” said Maurer. “I couldn’t be more thankful that my last mock trial competition was spent with this team, bringing Temple to the final round of a national competition it has not seen in many years. Temple operated with the utmost professionalism, and I would like to thank the American Association of Justice for encouraging fairness and sportsmanship.”

Together with the guidance of their coaches, the team put their extensive classroom and practical training to work, earning them a successful competition outcome. “It was a fun weekend and we were able to show the type of trial advocacy skills you can learn at Temple law against great competition,” said McLaughlin. “The Temple way works! Though we did not come out on top in the final round, I am extremely proud and grateful to be a member of this team! We were guided through the weekend by great coaching, support from the faculty, and the gutsy performance of our captain Taylor Maurer.”

Sam Heyman and Ananya Kulkarni echoed their teammates praise for the supportive Trial Team community. “I want to thank our coaches for providing us with the tools needed to perform at this level. I want to thank Taylor Maurer, our captain and fearless leader, for getting us to this point,” said Heyman. “The fact that we made it this far shows that Temple’s focus on real-world advocacy, not acting, can be a winning formula.”

“Being a part of the AAJ team was an absolutely incredible experience. I’m so grateful to have worked with my teammates who are some of the most dedicated and hardworking people I know,” Kulkarni added. “Our coaches, Professor Epstein, Professor Braccia, and Lauren Doig, taught us invaluable lessons to strengthen our advocacy skills and we can’t thank them enough for taking the time out of their busy schedules to work so closely with us. I’m so proud of our team and the success we’ve had over the semester!”

The National Trial team members and their coaches exemplify Temple’s proud Trial Advocacy legacy. “This group of students modeled that history – tens if not hundreds of hours of work, adapting strategies after each round to improve their advocacy, working from the early morning until late at night,” noted Epstein. “Mastering torts, civil procedure, evidence, and of course courtroom advocacy, they performed at the highest level possible.”

“Temple has a history of hard-working, creative, and never-say-die teams,” said Epstein. Among those dedicated teams is the Trial Team squad of Edmund Nyarko LAW ‘22, Mitch Atkins LAW ‘22, Dara Broadnax LAW ‘23, and J.B. Fitzgerald LAW ‘23, who participated in the Puerto Rico Trial Advocacy Competition (PRTAC) from April 7th to the 9th.

Hosted by the Interamerican University of Puerto Rico School of Law and its Trial Advocacy Association and sponsored by the Federal District Court for Puerto Rico, the First Circuit Court of Appeals, and the Federal Bankruptcy Court for Puerto Rico, the PRTAC is considered one of the best trial advocacy competitions in the United States. Of all competitors from the twelve teams of the twelve teams to be invited to participate in the competition, 2L Edmund Nyarko was awarded “best opening statement.”