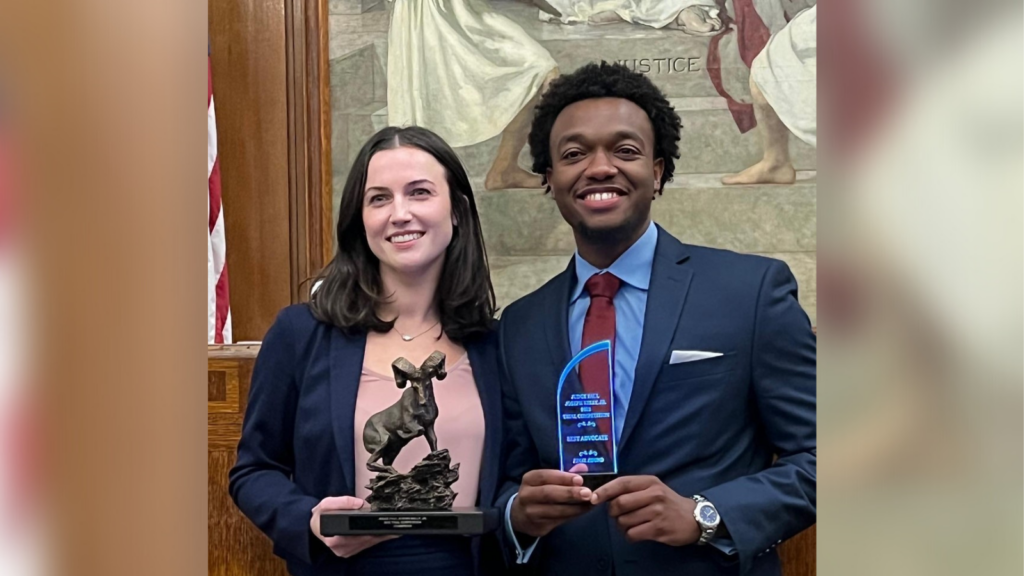 The Temple Law Trial team of Dorothy Hayes LAW ’24 and Christopher Moore LAW ’24 were named the 2022 Trial Competition Champions in the Judge Paul Joseph Kelly, Jr. Invitational Trial Competition hosted by Fordham University School of Law. Chris Moore was named the best advocate in the championship round.  In addition to the team’s championship win, Dorothy Hayes was awarded Best Closer in the opening rounds and Chris Moore was named Best Opener.

Professor Elizabeth Lippy, Director of the Temple Law Trial Advocacy Program, praised Hayes and Moore for their hard work and professionalism. Lippy also expressed thanks to team coaches Sarah Jacobsen, and Tatiana Webb LAW ’20 who spent “countless hours” working with the “dynamic duo.”  As with any Temple Trial Team, so many coaches, professors, and alumni contributed their time and effort, including Erika Storms, Professor Jules Epstein, as well as Trial Team alums Taylor Maurer ‘LAW 22, Isam Osman LAW ’22, Mitch Atkins LAW ’22, and Abby Cocco LAW ’22.  Through practice, persistence, and support from their coaches and the “all hands on deck approach,” Hayes and Moore came away with a hard-earned win and their own individual accolades.

“The feeling of winning a championship for such a storied and renowned trial advocacy program like Temple is indescribable,” said Moore. “I had no experience or understanding of what mock trial was or even what it even meant to be a trial lawyer. That didn’t matter to anyone in this program however. People like Elizabeth Lippy, Erika Storms, Dale Tan, Jules Epstein, Lauren Doig, Sam Gangemi, Sara Jacobsen, and Tatiana Webb all believed in me which meant the world. I’m glad my amazing partner Dorothy Hayes, excellent coaches Sara and Tatiana and I were able bring a championship home to contribute to the storied legacy of the number 1 trial advocacy program in the nation.”

“I am so proud to share this national championship win with Chris and the Temple Trial Advocacy program. This being my first competition, I wasn’t sure what to expect,” said Hayes. “But all those hours spent with our coaches, Sara Jacobson and Tatiana Webb, gave us everything we needed to win. In addition to our coaches, a special thank you to Liz Lippy and Erika Storms for their time and dedication in ensuring we were prepared for competition. Temple’s National Trial Team has already made such an impact on my time at Temple and my career goals—I can’t wait to see what the next 1.5 years bring.”