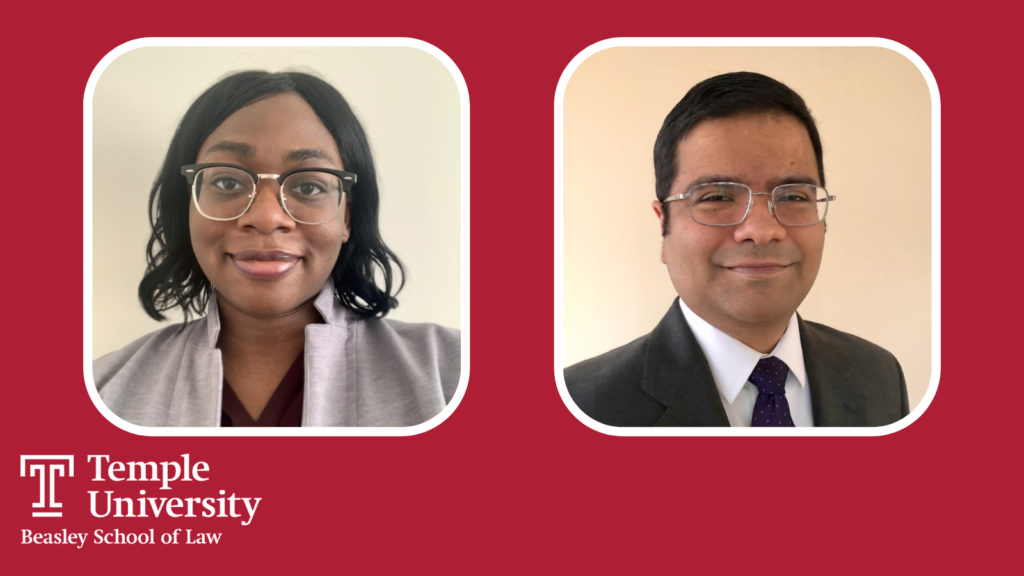 Organized by the ABA’s Tax Section’s Young Lawyers Forum, the Law Student Tax Challenge (LSTC) tasks two-person teams with solving real-life tax planning problems.The student teams are evaluated on both a memorandum to a senior partner and a letter to a client explaining the result. For the 21st year of the competition each team presented their oral arguments virtually before a panel of distinguished tax lawyers and tax court judges, with the winners announced at a virtual awards ceremony.

Their coach, Director of Graduate Tax Programs and Practice Professor of Law, Andy Weiner praised the team’s commitment and skill. “Melia and Adnan were thoughtful and determined in their preparations. They seized every opportunity to practice, constantly looked for ways to get better, and were focused and collected in the moment,” he said. “They reflect the best qualities of Temple Law and the Graduate Tax Program, and I couldn’t be more proud of them.”

With four teams in total competing in the LL.M. division, Melia Mbanefo initially had reservations about competing as a first year LL.M. student against students with more experience solving complicated tax issues. “I did my best to put those thoughts aside and focus on reading the task at hand as well as begin research in all these areas of tax in which I had yet to take courses,” she said. “From there my partner, Adnan, and I produced a draft, and after multiple meetings and edits to our memo we sent in our completed version. To my amazement we were selected as finalists and that helped reassure me that I can compete on the same level as those who may have been more experienced.”

In addition to working with Professor Weiner, the team prepared by mooting with several Temple Law professors and tax attorneys who acted as judges, giving helpful feedback along the way. “This support from our community was invaluable and I believe that helped set us apart from the competition in the oral defense round,” Mbanefo added. “Being able to participate in this competition and our subsequent 1st place win for the LL.M. division have both acted as immense confidence boosters for me. I would recommend to future law students who have any interest in tax, regardless of prior background, still compete and gain that experience from working through a complex issue with your partner, performing research, writing a memo, and hopefully also winning.”

Read more about the LSTC and watch the winners’ oral rounds here.