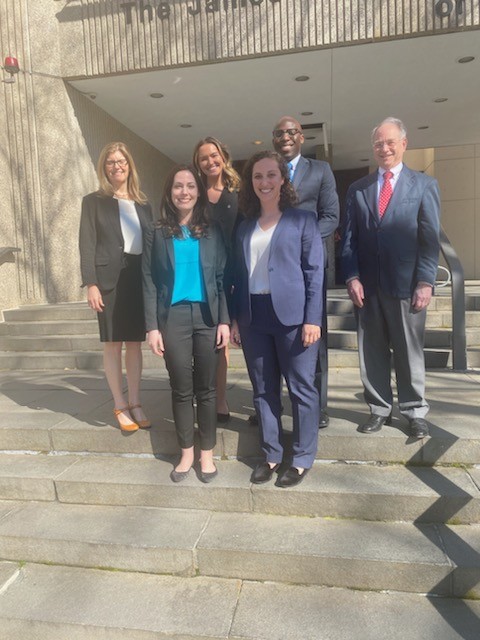 Update: While oral argument for the international round was cancelled due to the COVID-19 pandemic, the briefs submitted by each team were still scored. The Temple Law team’s government brief won three awards at the awards ceremony broadcast from The Hague: “Best Government Counsel Memorial,” “The IBA Best Memorial (the memorial with the highest score, irrespective of role),” and “Best Regional Memorial for the Americas and Oceania.”

For the third consecutive year, a Temple Law team has earned the right to represent the United States in the international round of the International Criminal Court Moot Court Competition, held annually at The Hague, Netherlands.

The team, which included Nikki Hatza, Kat Killian, Farai Shawa, and Julia Wilkins, placed first among U.S. teams at the Regional Round for the Americas and the Caribbean, outperforming teams from NYU, Georgetown, and Emory, among others. In addition to their overall finish, the team won first place for their prosecution and state memorials (briefs) and tied for first for their defense brief. Farai Shawa also took individual honors as best oralist for the defense. The team was coached by Professors Meg deGuzman and Rick Greenstein.

Temple has enjoyed considerable success in the Americas round in recent years, but like virtually every other law school event, this year was impacted by the arrival of coronavirus and the need for social distancing to slow its spread. For this round, that meant quickly converting an in-person competition to one held online. Noting that the competition organizers at Pace “did a superb job of adapting the competition,” Professor Greenstein offered praise for the team’s resilience in meeting this challenge. “The change in format required a dramatically different approach from what our students had been practicing for months, along with the need to use different skills,” he said. “Our students did an amazing job of quickly adapting to the new format, as is evidenced by their great success in the competition.”

Professor deGuzman also had high praise for the team, commending them for their mastery of both the subject matter and sophisticated advocacy skills. “In both their briefs and oral arguments, the students demonstrated the high level advocacy skills for which Temple is known,” she said. “This competition requires students to master a complex body of emerging international law — international criminal law – and our students rose to the challenge beautifully.”

Third-year law student Nikki Hatza, who served as state counsel, described the team’s determination to build on the prior year’s success. “In the past, the briefs were where we lost points, and we wanted this year to be different,” she said. “Using last year as a guide, we poured our energy from September through February into researching, drafting, and revising them. We turned our focus to mooting in February for the six weeks leading up to the competition. As someone who has never been part of a team like this, I was really looking forward to the competition. I have to admit, when we found out the it would be held virtually, I was a bit disappointed. But, after competing, I am so grateful that we had the option of using technology to go forward with the event.”

That option, unfortunately, was not available for the international round of the competition, which organizers were forced to cancel instead. “Although not really surprising, this news is very disappointing,” said Professor Greenstein. “This year’s team is enormously talented and has worked hard. I truly believe they had the potential to do quite well in the international round.”

Hatza, while disappointed about the cancellation, still found tremendous value in the experience overall. “Being a member of the ICC Moot Court team has been one of the most memorable experiences I’ve had at Temple Law, and I owe that to my wonderful teammates and coaches–especially after bonding through the uncertainty of a virtual competition during the coronavirus pandemic,” she said. “The best part is that it was one of the few times in law school where it really felt like our hard work paid off, with all of our briefs being awarded first place.”