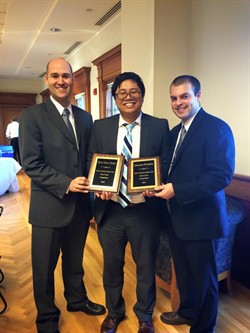 Third-year law students Richard Barzaga and Jordan Santo have boldly gone where no Temple Law students have gone before: to the North American regional round of the Manfred Lachs Space Law Moot Court competition, where they advanced to the quarter-finals and took Best New Team honors.

“In true entrepreneurial Temple Law student fashion,” said faculty advisor Professor Greg Mandel, “these students found an area of law and took on the task of not only preparing for and competing in a moot court competition, but getting up to speed on an entire body of law. Well done!”

After a promotional poster for the competition inspired the duo’s interest, they talked about the benefits of competing: “We thought it would be a great mental exercise to be able to take this really broad body of law that we were really unfamiliar with, research and brief the issues, and then be able to argue those issues in front of judges that included attorneys from SpaceX and the United States Air Force. We wanted to challenge ourselves,” said Barzaga. Added Santo, “On a more practical level, we knew the value of being able to show future employers that, in just a short amount of time, we could digest a wealth of information and communicate that information cogently and intelligently. In today’s legal market, efficiency seems to be the name of the game, and we wanted to demonstrate how quickly and efficiently we could become fluent in space law. While we might never practice space law (although we aren’t counting it out), the skills we developed during this competition will be useful in any field of law.”

Santo also cited the opportunity to practice his advocacy skills as a reason for entering the moot court competition. Together with Barzaga, he recruited fellow 3L Mike Besmer as a backup with moot court experience and familiarity with international law. Then, the group recruited Professors Jeff Dunoff, from the international law faculty, and Greg Mandel, who holds degrees in physics and astronomy and worked for NASA prior to attending law school.

A solid foundation in international law was essential because of the nature of space law. “Space law,” Barzaga explained, “is a combination of the national and international laws that dictate what activities governments and private entities may undertake in outer space. There is actually a whole body of space law that draws equally from various United Nations treaties, international case law, as well as the customs and practices of nations that actively explore outer space and the Moon.”

While neither Barzaga nor Santo is currently interested in becoming a “space lawyer,” they haven’t ruled it out. At this time, however, Barzaga’s plans include joining Weber Gallagher as an associate this fall, while Santo will be joining the United States Army Judge Advocate General Corps.