The Philadelphia Bar Association has recognized three members of
the Class of 2013 with the Eve Biskind Klothen Law Student Pro Bono
Distinction.  Catherine Anderson, Eleni Papademetriou
Belisonzi, and Emma Touhy all received the honor at the June 2013
quarterly gathering of the bar association.

Catherine Anderson, an evening student, performed more than 100
hours of pro bono service while maintaining a full time position as
a legal assistant at the Legal Clinic for the Disabled.  She
monitored elections with the Committee of Seventy, assisted
homeless clients at St. Francis Inn with the Homeless Advocacy
Project, and volunteered as a Legal Services Coordinator at
Philadelphia Volunteer Lawyers for the Arts.  In addition to
school, work, and pro bono service, Catherine also volunteered
regularly with Philly AIDS Thrift. 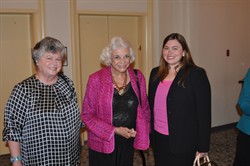 Eleni Papademetriou
Belisonzi (pictured at left with retired Justice Sandra Day
O’Connor and Professor Marina Angel), a Victim Witness Coordinator
at the Philadelphia District Attorney’s office before law school,
continued her commitment to public service and pro bono as a law
student.  She spent her first summer representing clients in
unemployment compensation hearings at Philadelphia Legal
Assistance, and later supervised other students as a
volunteer.  Eleni then returned to victim advocacy, working as
an intern at Women Against Abuse Legal Center and as a student
attorney with the Philadelphia District Attorney’s office.

Emma Touhy, fluent in French and basic Arabic, has spent her law
school career advocating for immigrants and the incarcerated.
After serving as both an intern and volunteer with the Pennsylvania
Innocence Project in her first year, she spent her second summer
working for the Pennsylvania Immigration Resource Center, where she
assisted clients with VAWA applications and U visas. Emma then
advocated for asylees as a student attorney with Temple’s
Immigration Clinic at the Nationalities Service Center throughout
her third year.