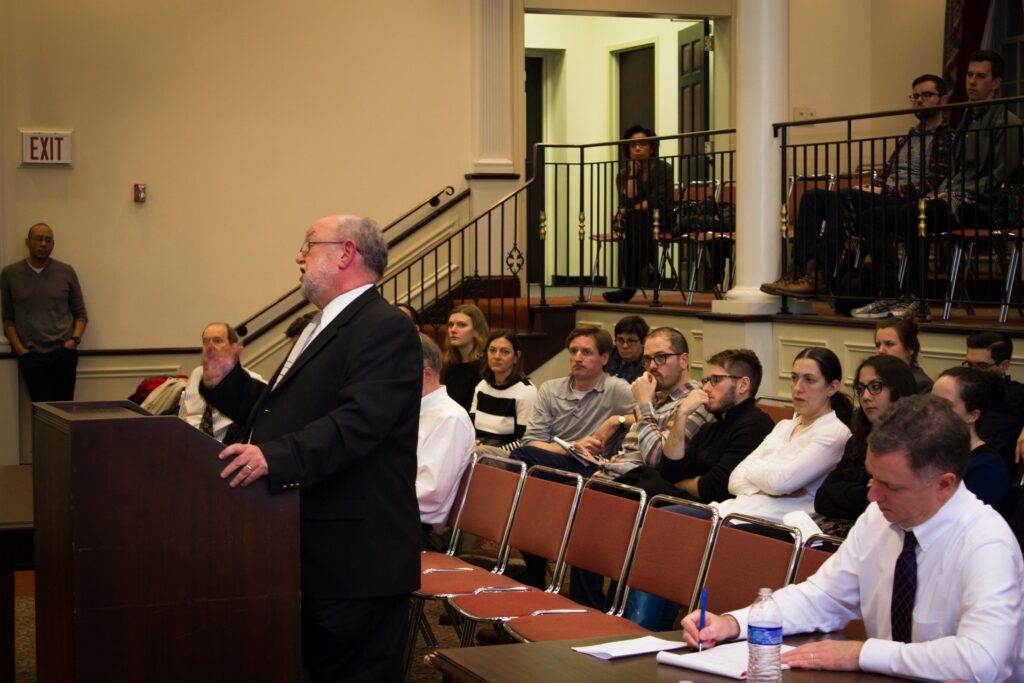 The news reports about Williams v. PA, a locally-based case heard by the U.S. Supreme Court at the end of February, may seem like déjà vu to some Temple Law students. That’s because members of the Temple Law faculty hosted a moot for Stuart Lev, the Assistant Federal Defender arguing for the plaintiff, in Temple’s Duane Morris LLP Moot Court Room in mid-February. Students present for the moot had the chance to watch accomplished advocates craft and polish arguments, anticipate what questions the Justices might have, and discuss strategy.

“I’ve been organizing moots at Temple Law since 1991,” said Professor Lou Natali, who coordinated the event. “They’re very valuable opportunities for the advocate to prepare and simulate real questions, and for students to learn what goes into crafting the arguments that ultimately get made to the Court.” Natali was joined in this effort by Professors deJarnatt, Epstein, Rahdert, and Reinstein, and by adjunct professor Patrick Egan.

Williams v. PA asks the Court to determine when a prosecutor-turned-judge must recuse himself from a capital case. Terrance Williams was convicted and sentenced to death for the robbery and murder of Amos Norwood. The Supreme Court affirmed Williams’ conviction and sentence, and he filed three petitions under the Post-Conviction Relief Act, all of which were denied and the denials affirmed by the Pennsylvania Supreme Court. Williams also petitioned for federal habeas relief, which was denied. On his fourth petition for relief under the Post-Conviction Relief Act, the state court determined that Williams had sufficiently demonstrated that there was governmental interference in his trial and granted the relief. The Pennsylvania Supreme Court reversed the lower court’s decision and lifted the stay of execution.

The Chief Justice of the Pennsylvania Supreme Court at that point was Ronald Castille, who had been the District Attorney for Philadelphia throughout Williams’ trial, sentencing, and appeal, and who had personally authorized his office to seek the death penalty in this case. In addition, then-District Attorney Castille was responsible for the Assistant DA who, it was eventually discovered, withheld potentially exculpatory evidence. Prior to having his case heard by the Pennsylvania Supreme Court, Williams moved to have Chief Justice Castille recuse himself from this case. Chief Justice Castille refused to do so and ultimately joined the opinion that reversed the lower court’s grant of habeas relief and lifted the stay of execution.

The U.S. Supreme Court’s decision in Williams won’t be known for some time, but Professor Natali was pleased with the success of the moot, observing that, “it turns out, we covered the hard questions that the Court could – and did – ask.”