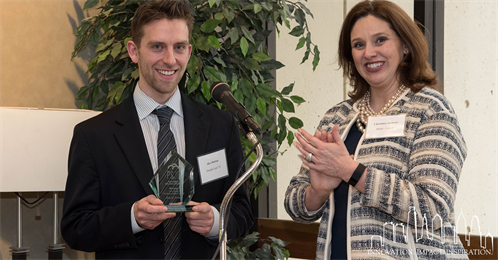 Third-year law student Alex Dutton has been honored with the PJSD Pro Bono Publico Award for his work in building a youth court program at Strawberry Mansion high school.  The award, which honors one law student nationwide for their pro bono contributions to society, was presented in a ceremony that featured remarks by Executive Assistant U.S. Attorney Robert Reed, Director of the EducationWorks Youth Court Support Center Gregg Volz, and Dean JoAnne Epps.

In his letter of recommendation, Mr. Volz summarized the impact of Dutton’s contribution to the Youth Court program and to the Philadelphia community: “Alex[‘s] efforts have sparked a potential paradigm shift in law school pro bono activity and shown how youth courts help disadvantaged youth help themselves.” Assistant U.S. Attorney Robert Reed concurred, calling Dutton’s work “transformative.” “Alex has a sincerity, an intellect, and a passion that you don’t often see in anybody,” remarked Mr. Reed. “But when you do meet someone like Alex, it is inspiring. He is helping to bring opportunity and hope to the young people of Strawberry Mansion. I saw them at the end of the year, and they were transformed.”

Temple Law School Dean JoAnne Epps, citing the law school’s tradition of service with impact, praised Dutton for the impact that he has had on Temple’s neighbors in North Philadelphia. “It’s a really great day when, as you are falling off to sleep, you can say that you’ve done something to make someone else’s life better. This is a guy who has had an impact and has bettered our world.”

The award was presented by Christina Jackson, Director of Public Service Initiatives and Fellowships at the National Association for Law Placement (NALP), who commended Dutton for his work in bringing the community together. Dutton, in accepting the award, cited the law school community for its passionate support of the pro bono efforts of many Temple Law students and faculty and for “giving law students a platform for making change.”