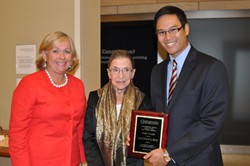 Matthew Tom ’13 has been named the winner of the
2013 Ruth Bader Ginsburg “In Pursuit of Justice” Writing
Competition by the Philadelphia Bar Association.  His winning
paper is titled “Application of the Exclusionary Rule in
Immigration Proceedings: Not Just Egregious Violations,
Recommendations for Meaningful Protection of Civil Rights.”
Matthew received the award from Justice Ginsburg herself at a
reception following her appearance at the National Constitution
Center on September 6, 2013.

Matthew wrote the paper for Professor Lee Carpenter’s
Introduction to Public Interest Law course. He developed the idea
for the paper after noticing “the parallels between immigration law
and criminal procedure, and the absence of constitutional
protections in immigration law that are present in criminal law. ”
Professor Carpenter, who encouraged Matthew to submit the paper to
the competition, noted that it is “truly impressive.  It is,
as all legal writing ought to be, rigorously researched and clearly
presented.  But more than that, it’s an example of what Temple
students do best.  First, they develop a deep understanding of
law.  Next, our students take that knowledge out into the
world, where they use what they’ve learned to creatively solve
real-world problems and boldly confront pervasive injustice.”

Temple Law students have a long record of success in the
Ginsburg Competition, having taken top honors in nine of the eleven
years the Competition has been in existence. This “track record of
winning the Ginsburg,” said Professor Carpenter, ” is just one
example of why I’m proud to be part of the Temple Law
community.”

Since submitting the paper to the Ginsburg Competition, Matthew
has graduated from Temple Law and is now an associate at the
Philadelphia firm of Cohen Seglias Pallas Greenhall & Furman,
P.C., where he works in their construction litigation group.