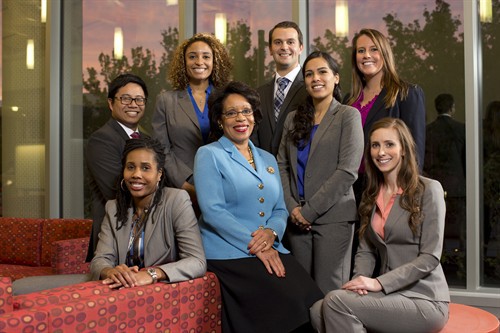 Temple Law School rose to #52 in the 2016 U.S. News and World Report rankings, marking the best result to date for the Law School and reflecting a national reputation for excellence. “I’m pleased, but not surprised, by this continued recognition of our efforts here at Temple Law,” remarked Dean JoAnne Epps. “The faculty are deeply committed to ensuring that our students have the skills, knowledge, and professionalism necessary to succeed in whatever practice setting they choose.”

The individually ranked programs in Trial Advocacy, Legal Research and Writing, and International Law also continued to excel. The Trial Advocacy program, which has been ranked in the top three for the past 20 years, retained its dominance at #2, while Legal Research and Writing – also a historically strong performer – came in at #11. The International Law program proved itself among the nation’s elite with a #14 ranking. In addition, Temple’s part-time program also continued its exceptional performance, ranked at #7. Temple is the only law school in the region with four highly ranked specialties.

Professor Nancy Knauer, chair of the faculty Admissions Committee, gives credit for Temple’s success not only to the faculty, but also to the students. “Our students are smart, motivated and engaged. They choose Temple because of the opportunities we can provide to help launch their careers.”

Temple’s U.S. News rankings are consistent with other recent rankings that measured graduate performance in practice. A January 2015 report by SuperLawyers ranked Temple Law #6 nationally for highest caliber and most practice-ready graduates, and in February 2015 the National Law Journal ranked Temple #35 on its list of the top 50 Go-To Law Schools. Temple is also ranked as a Best Value law school by the National Jurist Magazine.

Taken together, the rankings reflect Temple’s commitment to holding the line on cost while delivering a world-class legal education. “We’re very conscious of the fact that law school is a considerable investment,” acknowledged Dean Epps. “We work hard to ensure that our students have what it takes to make that investment a successful one.”