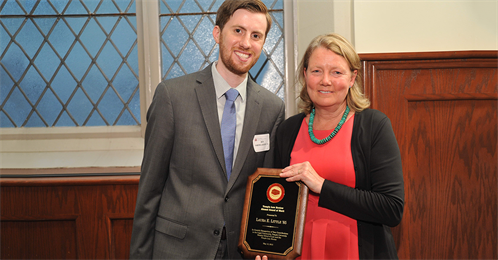 The Temple Law Review hosted its inaugural Alumni Banquet on May 13, 2015, gathering alumni from the last thirty years to celebrate the Law Review generally, to honor Professor Laura Little for her many contributions to the Review during her time as Editor in Chief and as long-serving faculty advisor. The Banquet also included a brief program during which the Review gave out four awards.

At the outset of the program, Dan Mozes LAW ’13 and Alison Stohr LAW ’13 welcomed everyone to what the Law Review hopes will be the first of many such gatherings.  Professor Dave Hoffman, faculty advisor to the journal, offered remarks about the virtues of working on the Law Review and commended Professor Little for her years of seamlessly navigating the difficult responsibility of advising the journal.

Professor Hoffman’s speech was followed by the awards portion of the Banquet, where the current editorial board presented three awards to current members of the Law Review. Ben Fabens-Lassen offered an update on the most recent history of the Law Review.  The awards were then presented by Ben Fabens-Lassen, Kate Vengraitis, Zach Roth, and Terese Schireson. First, the Law Review announced this year’s J. Howard Reber award winners (who will receive their awards at graduation).  William Lesser received the award for outstanding editing, and Anna Kessler was awarded the honor for outstanding writing.  Additionally, Samar Aryani-Sabet won the 2014-15 Staff Editor of Year Award.

For the final award of the night, Dean Epps gave a heartfelt speech dedicated to Professor Laura Little, who was then presented with the first Temple Law Review Alumni Award of Merit for her countless contributions to the Law Review. Professor Little’s husband (whom she met during her time as an editor on Law Review) and daughter were in attendance.