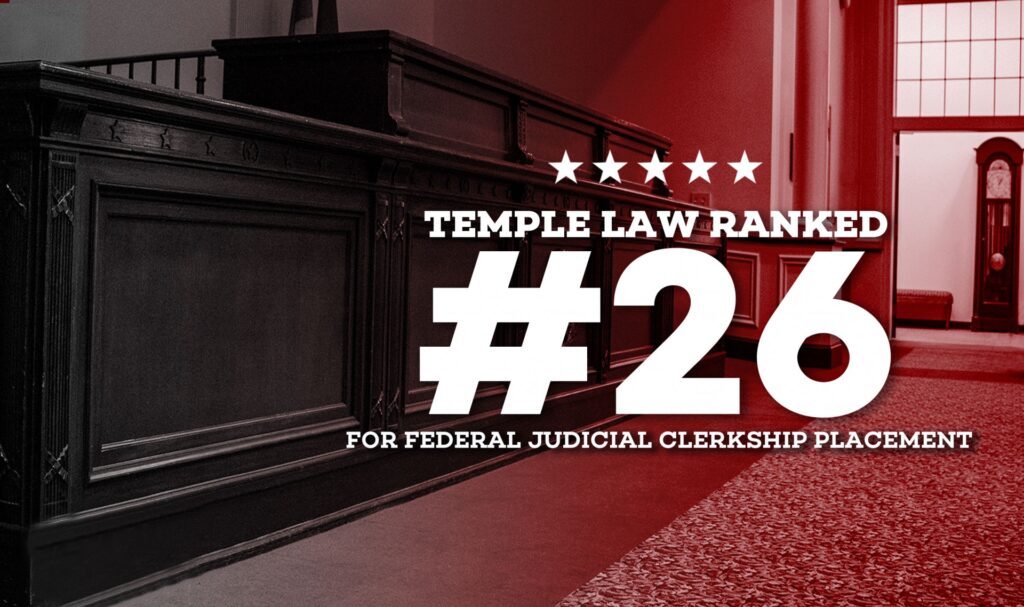 Temple Law School has been ranked 26th among ABA-accredited law schools in federal clerkship placement. Federal clerkships, which offer prestige, experience, and an insider perspective on the workings of the judiciary, are among the most sought-after jobs available to new law graduates. Temple was second only to the University of Pennsylvania among regional law schools.

Related: Patrick Huyett (LAW ’14), law clerk for the U.S. Court of Appeals for the Third Circuit, describes the day-to-day life and benefits of federal clerkships.

The ranking is the result of an analysis of ABA employment data by Derek Muller, a professor at Pepperdine University School of Law and author of Excess of Democracy. Professor Muller examined the data about the three previous graduating classes at each school and calculated both the total number of graduates who obtained a long-term clerkship at graduation and the percent of total graduates they represented. The rank is based on the percent of total graduates. To be counted, a clerkship had to be full-time and long-term, meaning for one year or more, and had to be obtained by a member of the graduating class. From the Temple Law classes of 2013, 2014, and 2015, 4.5{78ecce420c77cf1db311302f5b6e37cdb1436b302b8829c31daeba597410ad34}, or 36 total graduates, obtained federal clerkships.

In addition to offering informational sessions about clerkships, the Temple Law Office of Career Services works to assist interested students as they move through the application process. Temple Law graduates have held clerkships throughout the country and at every level of the judiciary. To learn more about the clerkship process at Temple Law, click here.