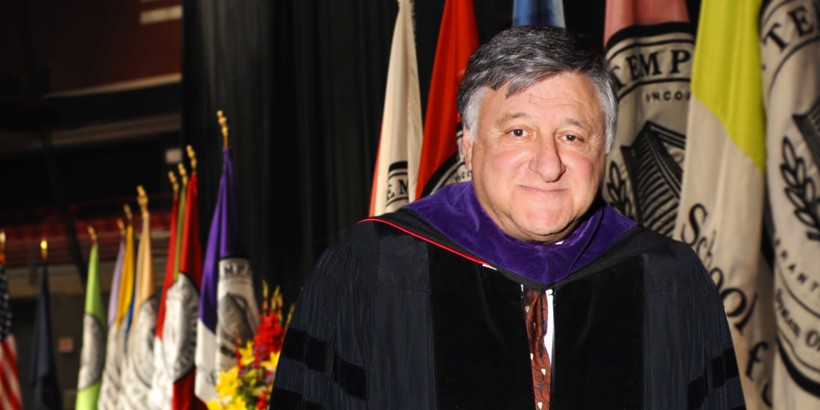 The Temple Law community joins the family and friends of beloved Professor James A. Strazzella in mourning his unexpected passing on January 28, 2017.

A member of the Temple Law faculty since 1973, “Straz,” as he was known affectionately by faculty and students alike, has served the law school with dedication for more than four decades. He was a demanding but compassionate teacher who worked tirelessly to prepare his students for success in the profession he loved. Professor Strazzella, who served as the James G. Schmidt Professor of Law, taught basic and advanced courses in substantive criminal law, criminal procedure, and appellate procedure, and served as Acting Dean of the law school from 1987 to 1989. His teaching was recognized by the Lindback Award for Distinguished Teaching (1983) and the George P. Williams Award for Outstanding Professor (2010).  Prior to joining Temple, he taught and served as Vice-Dean at the University of Pennsylvania School of Law from 1969 to 1973.

Professor Strazzella was known throughout the Temple Law community for his extraordinary kindness, thoughtfulness, and care for the people he encountered each day, whether as students or colleagues. He was deeply generous with both his time and his wisdom, and often followed up a conversation with a token gift from the collection of mementos in his office, accompanied by a note or explanation of its significance.

Professor Strazzella’s service on innumerable councils, task forces, commissions, and similar efforts at legal reform reflected his passion for the law and for the people it was written to serve.  He lectured nationally in educational forums designed for the judiciary and the practicing bar, both here and abroad, and worked with numerous groups in efforts to improve the legal process. He was particularly proud of his service as chair of the Pennsylvania Supreme Court’s Criminal Rules Committee under five Chief Justices, during which he led an intensive effort to modernize and streamline Pennsylvania criminal procedure. He also served on Pennsylvania’s Judicial Council, and for many years was a guiding faculty advisor to the national program for the continuing education of appellate court judges.

Professor Strazzella was deeply respected on the national stage for his wisdom, insight, and sense of fairness. He served as an Assistant United States Attorney for the District of Columbia from 1965 to 1969, during which he rose to become the deputy chief of the appellate division. In 1968, he served as the Designate of the U.S. Attorney to the Committee on the Administration of Justice under Emergency Conditions. In 1970, he was asked to serve as chief counsel to the Kent State Task Force, part of the President’s Commission on Campus Unrest. Professor Strazzella remained active in the profession long after joining academia, and in 1998 served as chair of the ABA Task Force on the Federalization of Criminal Law. His service whenever called, and the universal respect he garnered from all branches of government, were reflective of his passion and commitment to law as a vital social institution.

Professor Strazzella was also a dedicated and active member of his community, and particularly involved in efforts to save Smith Memorial Playground, for which he was awarded the Ida Newman Magic of Play Award in 2013. He was also the 2015 Founder’s Award recipient from the Fireman’s Hall Museum, for whom he served as an active board member for more than 35 years, including a term as board Vice-President and service as chair of several board committees. Professor Strazzella also served as a trustee of the Wagner Free Institute of Science, a public library trustee, and as president of “A Better Chance in Lower Merion,” which worked to help economically disadvantaged high school students get to college.

A law school memorial program will be held in the Moot Court Room on Friday, February 24th at 3:00 p.m. If you would like to share a memory or leave a message for Professor Strazzella’s family and friends, we invite you to do so here.