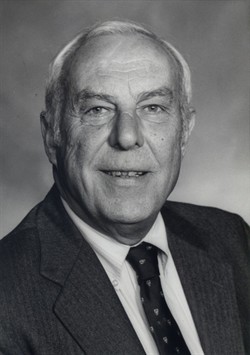 Temple Law School has lost one of its own with
the passing of Professor Emeritus Joe Marshall ’53, a legendary tax
professor who served the law school from 1960 to his retirement in
1996.

In addition to teaching taxation to generations of Temple
lawyers, Professor Marshall developed the Graduate Tax program and
served as its director from 1970-1984.  During that time, he
also served twice as acting Dean (1970-1971 and again in spring
1980) and directed the Graduate Legal Studies Division as well as
the summer sessions in Athens and Rome.  Professor Marshall
also served as the Temple University faculty representative to the
NCAA.

Professor Marshall was widely recognized as an outstanding
educator and colleague.  In addition to the Joe Marshall
Scholarship fund, established in 1992 by former students, he was
honored by the University with the Lindback Award for Outstanding
Teaching in 1973; by the Class of 1981 with the Outstanding
Professor Award; by the class of 1987 with the George P. Williams
III Award; and with the Law Alumni Special Achievement Award in
1988.