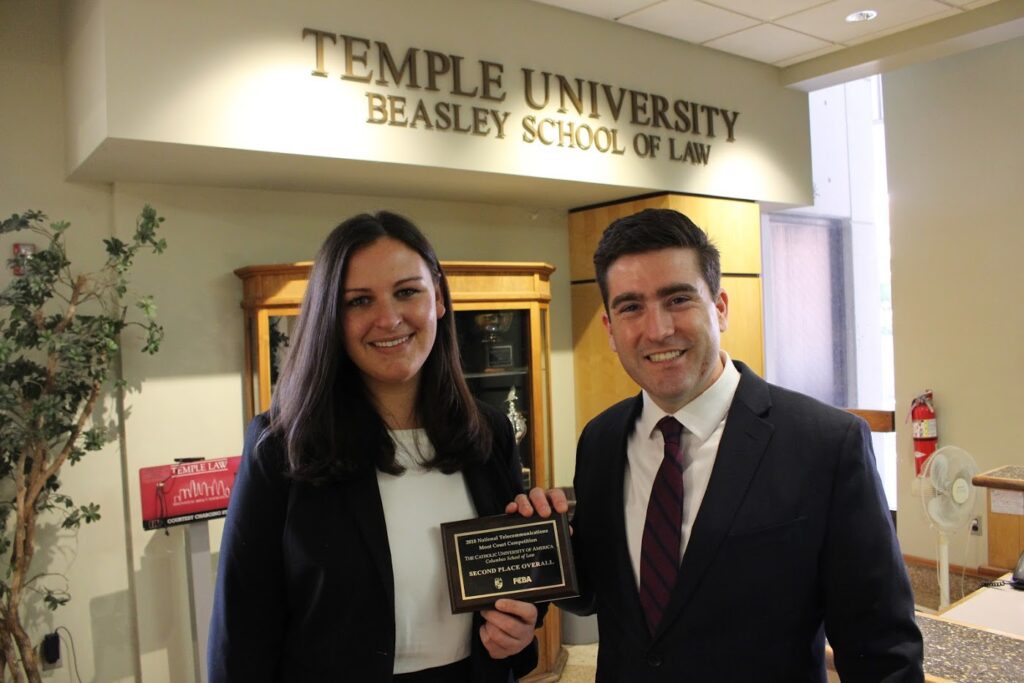 The Temple University Beasley School of Law Moot Court Competition Team placed second in the 24th annual National Telecommunications and Technology Moot Court Competition, held over the weekend of February 9th and 10th, 2018. The competition was hosted jointly by The Catholic University Columbus School of Law, in Washington, DC, and the Federal Communications Bar Association. Temple was represented by the team of Eileen Bradley LAW ’18 and Joseph Bailey LAW ‘18. The team was coached by Sue Affronti LAW ‘01, former Chief of the Federal Litigation Unit for the Philadelphia District Attorney’s Office, and currently a Law Clerk in the Eastern District of Pennsylvania.

Each year, the competition subject is “ripped from the headlines” of current telecommunications, technology, and intellectual property issues, such as the consumer privacy of personal information, copyright protection of pre-1972 musical performances, and the enforcement of broadcast indecency standards. This year’s competition problem involved illegal jamming and First Amendment issues. Bradley and Bailey competed in three rounds of competition prior to the final round, where they faced a team from The George Washington University Law School.

Bradley and Bailey have a proven track record of Moot Court success. Bailey won the 2016 I. Herman Stern Moot Court Competition in which Bradley was the runner-up. The Stern Competition is held annually for new members of the Temple Moot Court Competition team. “Eileen and Joe are a Moot Court dream team – they are among the best of Temple’s student advocates. I had high hopes for their success at the Telecommunications Competition and they did not disappoint,” said Professor Bonny Tavares. Their coach, Sue Affronti, added to the praise: “Joe and Eileen were tremendous! They exhibited poise, technique, and skill,” she remarked. “Our team never seemed ruffled or thrown, but was always calm. They also did an outstanding job of learning FCC insider insights on the fly. Each argument was stronger than the prior.”

The Temple Moot Court Competition Team is co-directed by Professor Bonny Tavares and Professor Mary Levy. In addition to Temple’s innovative, faculty-directed competitive moot court program, Temple also offers students access to veteran appellate advocates on both the fulltime and adjunct faculty, the opportunity to compete against students across the Philadelphia region in the  Temple Law Oral Argument Competition, and the opportunity to learn as Temple faculty moot seasoned lawyers for high stakes appellate arguments.