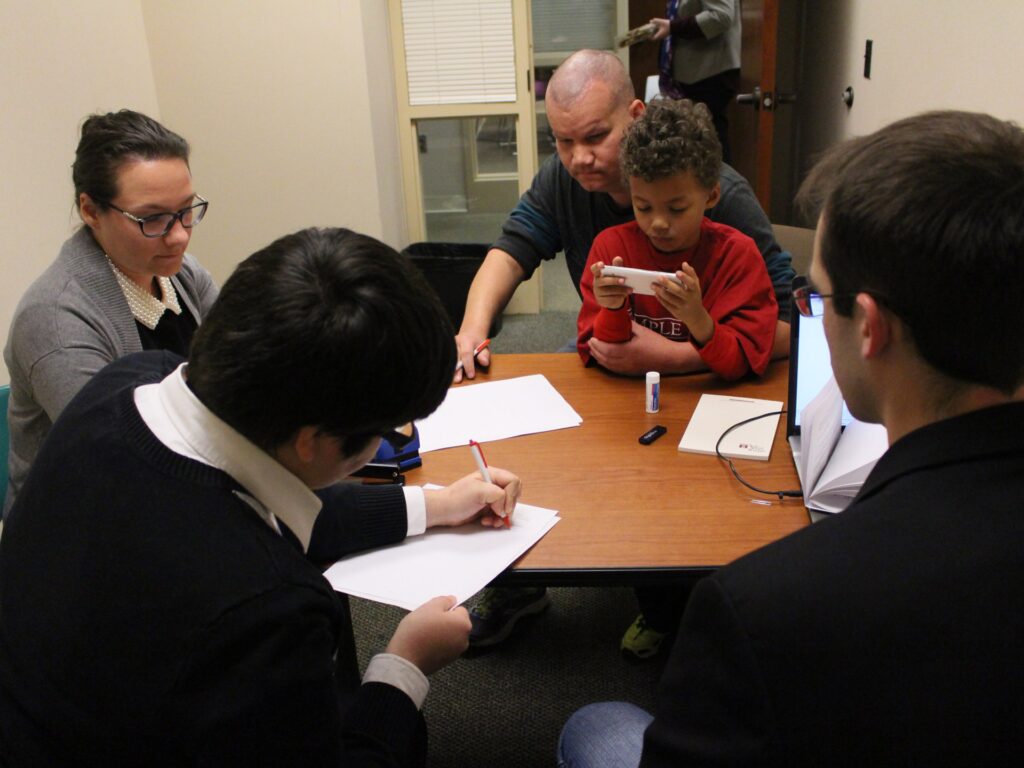 This post originally appeared in the Temple University Newsroom. The original article, written by Morgan Zalot, is available here.

This Veterans Day held a special meaning for Jason Noren, an Iraq War veteran and Fox School of Business graduate student—he spent it at Temple University with his 7-year-old son by his side, preparing for his family’s future.

Noren, who served 14 years in the Air Force as a meteorologist in both the Iraq and Afghanistan wars, was among more than two dozen people who came to Temple’s Beasley School of Law on Veterans Day for Wills for Heroes, a program that provides wills for military veterans, police, firefighters and other first responders at no cost. Noren, who is currently pursuing a Master of Business Administration at Fox, brought along his son, Jayden, to the event.

“I needed to get [my will] updated … to reflect life transitions,” said Noren, who completed his military service last year and left the Air Force as a major weather officer. “I know wills can cost $350, and I don’t have that kind of money right now.”

Associate Professor Kathy Mandelbaum, director of Beasley’s Graduate Tax Program, coordinated Friday’s Wills for Heroes to coincide with Veterans Day. During the event, students in the Integrated Transactional Program this semester paired with practicing attorneys and notaries to draw up wills and powers of attorney for veterans, police and first responders who participated.

“I want them to see how lawyers practice law,” Mandelbaum said Friday as she helped students work with Wills for Heroes clients in Barrack Hall, where the students and attorneys met with veterans in small, private rooms to draft their documents. “I do everything I can here to make this look like the practice of law.”

I do everything I can here to make this look like the practice of law.

Evidence of that reward on Friday was Lizzy Owens, LAW ’16, who participated in Wills for Heroes as a Temple Law student and came back on Veterans Day to offer pro bono services.

“It’s an amazing cause. I’m actually in estate planning now,” Owens said, adding that it was through her work as a student with Wills for Heroes that she learned she enjoyed that area of law.

Temple has a long history with Wills for Heroes. The organization’s current president, Daniel McKenna, LAW ’04, joined the program a decade ago when its creator brought him on board to help expand it nationwide. Students in the law school generally have about four opportunities per year to participate in the program, which was first created to provide wills for police officers, firefighters and other first responders, but recently expanded to include veterans as well.

“It’s fabulous, the fact that they chose to include veterans in the program,” Mandelbaum said. “I’m proud of the program that they did that.”

Mandelbaum coordinated with Temple’s Military and Veteran Service Center to get the word out about Wills for Heroes to student veterans, which is how Noren says he learned of the event being held on campus.

For Noren, having his will done through the program meant more than just getting his documents in order.

“We do put our lives on the line, and I know companies and organizations are doing their best to give back for our sacrifices and our families’ sacrifices,” Noren said as he waited with Jayden to have his documents reviewed and notarized. “It’s encouraging.”