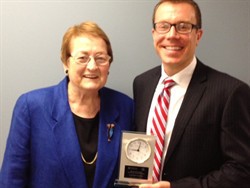 The Pennsylvania Bar
Association presented Andrew Alston ’13 its first Law Student Pro
Bono Partner Award on Friday, November 1, 2013 in a special
ceremony at the Defender Association of Philadelphia. Alston, who
graduated from Temple Law in May 2013, worked at the Defender
Association for six years as a paralegal and is now an Assistant
Public Defender. He was presented with the award by Chief Defender
Ellen Greenlee (pictured) and PA Bar Pro Bono Coordinator David
Trevaskis.

Alston’s nomination noted that “his whole reason for going to
law school was to serve the most needy of our fellow
Pennsylvanians,” a task he has been working on
since he was a college student.  The range of Alston’s
activities as a Temple Law student, from programs in the
Philadelphia Traffic Court to work with the Eastern District of
Pennsylvania, show his commitment and underscore the significant
contribution law students can make to accessing justice for the
poor.  Alston has worked with felons re-entering society and
with veterans facing a wide variety of
legal issues.  He has also volunteered for public education
programs run by both the Philadelphia and Pennsylvania Bar
Associations.

Trevaskis noted that “At a time when we are celebrating the
50th anniversary of Gideon but finding much
more needs to be done on both the criminal and civil sides of the
law to realize the promise of that case for access to justice for
all, Alston’s example is an inspiring rebuttal to the cynics who
claim there is nothing we can do to change the
picture.”