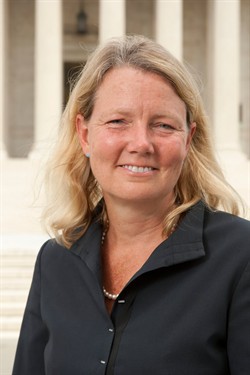 The Supreme Court of India relied extensively on scholarship by Professor Laura Little to strike down as “unconstitutional and void” India’s judicial appointments process. The 4:1 opinion, handed down on October 16th, 2015, rejected an act and constitutional amendment that would have given politicians control over judicial appointments, much like the nomination and confirmation system used in the United States.

“India is the world’s largest democracy,” noted Professor Little, “and its judiciary has caught the world’s attention for its progressive opinions. So, it’s fair to say that I am pleased.”

At issue was the constitutionality of the National Judicial Appointment Commission (NJAC) Act and 99th Constitutional Amendment, which “sought to give politicians and civil society a final say in the appointment of judges to the highest courts,” according to an article in The Hindu. Justice J.S. Khehar, the presiding judge, explained in his opinion that, “The expectation from the judiciary, to safeguard the rights of the citizens of this country, can only be ensured, by keeping it absolutely insulated and independent, from the other organs of governance.” If judges became “indebted” to the politicians who supported their appointment, he reasoned, such independence would be impossible in the context of Indian social and cultural norms.

The Court quoted Professor Little’s scholarship on judicial independence at length in reaching its conclusions. The relevant passages can be found on pages 363-364 of the opinion.

“Under the constitutional scheme in place in the United States of America, federal Judges are nominated by the President, and confirmed by the Senate. The issue being debated, namely, the concept of “the legitimate power of reciprocity”, therefore directly arises in the United States, in the matter of appointment of federal Judges. The first favour to the federal Judge is extended by the President, who nominates his name, and further favours are extended by one or more Member(s) of the Senate, with whose support the Judge believes he won the vote of confirmation. An article titled as “Loyalty, Gratitude, and the Federal Judiciary“, written by Laura E. Little (Associate Professor of Law, Temple University School of Law, as far back as in 1995), deals with the issue in hand, pointedly with reference to appointment of Judges. The article reveals, that the issue of reciprocity has been a subject of conscious debate, with reference to the appointment of Judges for a substantial length of time.”

The Court quoted Professor Little extensively, incorporating three paragraphs of her work into a discussion of the complex problem posed by moral issues of gratitude and loyalty to judges who “owe” their jobs to political benefactors. “This complexity emerges,” Professor Little wrote, “to a great degree from the process of nomination and confirmation, which often generates, or at least reinforces, a judge’s sense of loyalty and gratitude to her benefactors …. To omit from these concerns the effect of any change on the ultimate quality of judicial decisionmaking would, of course, be a mistake. Thus, in studying any new selection procedure, we must contemplate the procedure’s potential for creating and invigorating a judge’s feelings of loyalty and gratitude to her benefactors. The foregoing should, therefore, not only shed light on the process of federal court decisionmaking in general, but also give much needed guidance for evaluating proposed changes to judicial selection.”

Professor Little, a noted scholar in the areas of constitutional law and federal courts, is the Charles B. Klein Professor of Law and Government. After graduating from Temple Law School in 1985, Professor Little served as a law clerk to Chief Justice William H. Rehnquist, Supreme Court of the United States (October Term 1986) and Judge James Hunter III of the United States Court of Appeals for the Third Circuit (1985-1986).