On June 8, 2014, rising third-year evening students Alexandra Steinberg and Colin Saltry assisted Judge Ann Butchart (LAW ’93) in performing 14 same-sex marriages on Philadelphia Pride Day. Temple Law caught up with Colin and Alexandra to get their thoughts on summer internships, their experience on Philadelphia Pride Day, and the role of lawyers during historic movements. 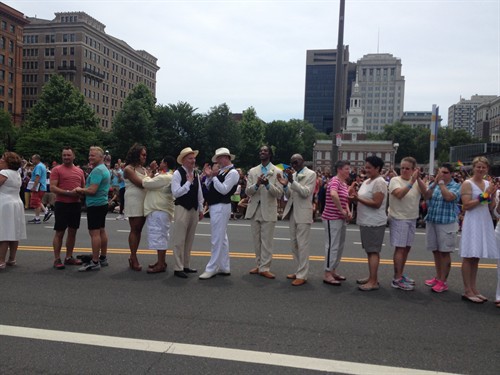 Temple Law: Can you describe your summer internships? What are you doing on a day-to-day basis when you’re not performing same-sex marriages?

Colin Saltry: My internship is actually a full time job. I am Tipstaff (court officer) for the Honorable Judge Marlene Lachman. It’s my job to manage the courtroom: swearing in witnesses, assisting the judge during voir dire, assembling research for motions pending before the judge, taking verdicts in open court, etc. My office is the courtroom, so the experience is invaluable.

Alexandra Steinberg: I am a second summer law clerk intern for the Honorable Judge Ann Butchart, Pennsylvania Court of Common Pleas, Criminal Division, Smart Room. On a day-to-day basis, I am observing court and drafting memoranda on Motion to Suppress and Motion to Quash motions.

TL: When did you find out that you would have the opportunity to participate in performing same-sex marriages during Philadelphia Pride Day?

AS: Shortly after the Honorable John E. Jones III struck down Pennsylvania’s Defense Against Marriage Act, Judge Butchart began performing private same-sex wedding ceremonies in her judicial chambers at the Criminal Justice Center. As part of my internship duties, I aid Judge Butchart in officiating these ceremonies.  On June 6, 2014, Judge Butchart informed me about her participation with Judge Anders at Philadelphia’s 2014 LGBT Pride Parade, and I quickly volunteered my services.

CS: Ally (Steinberg) was observing jury selection in my courtroom one afternoon and mentioned that Judge Butchart and Judge Anders would be performing a mass same-sex wedding ceremony during the Philadelphia Pride Day Parade and asked if I would like to help out. Needless to say I jumped at the opportunity.

TL: Why was it important to you both to participate in such an event?

AS: I have been studying and analyzing same-sex marriage the entire past year at Temple Law. I was originally introduced to the issue in the fall semester in Professor Reinstein’s constitutional law class and family law with Professor Rebouche. Inspired by United States v. Windsor, I took  sexual orientation, gender identity & the law with Professor Carpenter during the spring semester and wrote about same-sex divorce for my semester research paper. It was an honor to see Pennsylvania’s DOMA struck down and Justice Scalia’s dissenting opinion in Windsor slowly become a reality in our country. I will never forget the day that I represented Temple Law in assisting in the first round of same-sex marriages in our Commonwealth.

CS: I’ve been looking forward to equal marriage in Pennsylvania for a long time, so when the Whitewood v. Wolf decision came down I was ecstatic. I had asked around at City Hall if I could help out in anyway when the first marriages were going to be performed but didn’t really get anywhere. It took a Temple Law connection to make it happen. It was such a tremendous honor to volunteer with Ally and help Judge Anders and Judge Butchart bring such joy to the 14 couples who got married during the pride parade.

TL: Was there a specific moment during the day that was particularly special to you?

CS: At the end of the ceremonies, we were filling out the couples’ marriage licenses and getting all of the paperwork in order. Getting these licenses filled out correctly was all that separated these couples from finally receiving the legal recognition that they and so many others had sought for so long.  I was touched.

AS: Agreed. It was particularly special to actually put pen to paper. Judge Anders’ law clerk and I had the responsibility of filling out all of the same-sex marriage licenses. It was a surreal moment.

Another significant moment was when one couple, out of the fourteen couples total, asked for a private ceremony and opted out of the group wedding. In Judge Butchart’s words, “there is a vast difference between ‘private’ and ‘public’, in terms of the legal significance of words. Other than being occasionally sworn in for jury duty, for most people, their wedding day may be the only time they publicly and legally make a binding declaration. This is, in part, why the opposition to marriage equality might be so entrenched: people are conscious of how powerful the ceremony is, in its legal significance.”

TL: Can you talk about the larger role that lawyers get to play during these movements in history?

CS: I think lawyers play an important but not central role in history’s great movements. Those generations of individuals discriminated against because of who they are and who they love did most of the leg work in achieving equality in this case. But you can’t ignore the vital role attorneys play in carrying their cause over the finish line.

AS: It’s our responsibility as attorneys to break down laws that we and our clients feel are unjust. If it were not for attorneys, landmark cases, such as Brown v. Board of Education or United States v. Windsor would have never become a reality. We need attorneys to be the backbone of our society and enhance the application of check and balances inherent in our constitutional system. 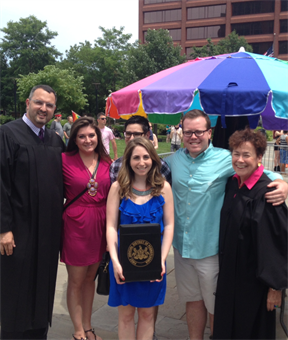 TL: What do you plan to do after graduation? Has this experience impacted your career goals moving forward?

CS: I’m still not entirely sure what I want to pursue after graduation, but this experience has helped solidify my desire to work directly with people in need. Whether it’s representing under-privileged clients in the community or helping newly married same-sex couples navigate the absurd obstacles imposed by 19th century sensibilities, I want to be there to help.

AS: Before attending law school, I studied Art Law at New York University. I hope to practice art law after graduation at a small boutique firm in Manhattan or work for a large auction house. Additionally, from my most recent experience and my same-sex studies, I have become interested in the complexities of same-sex divorce law. However, I hope that the classification of same-sex divorce cases will become obsolete by the time I graduate with the demise of all the remaining state DOMAs.