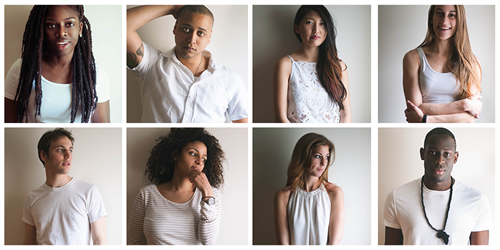 Editor’s Note: This past spring, rising second-year student Jessica Stachelrodt began an artistic project featuring the Temple Law School student community. We caught up with Jessica to talk about her inspiration for the project, the key to capturing the perfect candid moment, and how the photography helps her balance the demands of law school.

Temple Law: How did you come up with the idea to start taking photos of the Temple Law student body?

Jessica Stachelrodt: When I first started to get to know my classmates in the fall of 2014, I found myself feeling overwhelmed with how impressive they all were. They were professional athletes, polyglots, social activists, parents, business owners, scholars, etc. It was incredible. In addition to their amazing resumes, they were hands down the most racially and ethnically diverse group of people I have ever been surrounded by. Part of the reason I chose Temple was because of its diverse demographics, but seeing those people represented as numbers on a website was so different from sitting next to them in class. Getting to know these people and hearing their stories was a very empowering and emotional experience for me. Simply put, I chose to photograph my peers as a way to showcase this diversity.

TL: Why photography? Has that long been a hobby of yours?

JS: I started photographing when I was a sophomore in college. My parents bought me a DSLR for Christmas that year and I just started taking pictures of the Mercyhurst Dance Department performances, and portraits of my roommates. In the spring of my sophomore year I started taking photography classes at Mercyhurst. The students and faculty seemed to really like my work and it just sort of picked up from there. Mercyhurst has used my photos for billboards and advertisements. I’ve also had several small, paid portraiture projects including high-school seniors, professional headshots, small weddings, and calendars.

My favorite projects, however, have always been candid shots. For as long as I’ve been doing it, photography has felt like the ability to give people the gift of their most honest moments – moments when they are being the most pure, uninhibited versions of themselves. Most people never get to see themselves this way; when they do, they usually love it. It makes them happy, which makes me happy.

TL: What is the secret to bringing out that honest moment in a person and then capturing it with a photo?

JS: Some people are different than others, but the most important thing for me is being able to get them to focus on something other than me and my camera. My experience has taught me that absolutely everyone is photogenic when they aren’t paying attention. I try to make them comfortable.

For example, some of my subjects needed to bring friends to the shoot, while others preferred to be photographed alone. Either way, I started the shoot by asking them questions about themselves. We talked about professors, other students, or even a controversial topic. There is almost always a magic moment to capture immediately after I ask a question. Laughter is also an easy thing to photograph. I guess the “secret” is to watch and wait for your subject to forget about you, and make sure you’re ready when that moment comes.

TL: How did you choose to photograph the students in this style, and why?

JS: I wanted the entire series to be one cohesive design. I figured everyone owned a white shirt, so I asked them to wear it. Also, these photos were taken in an empty, off-white room and I wanted the subjects’ clothes to blend in with the room’s color and the soft light from the window. I was hoping this combination would focus the viewers’ attention on the subject’s eyes and facial expression.

TL: Were you concerned at all that law students, busy or stressed out, would not be interested in having their photo taken?

JS: Yes, definitely. I was very hesitant to ask at first. A few of the people I asked to participate declined to do so for that very reason. I was also worried that because most people don’t come from a performing arts background they would be hesitant to be the center of non-academic attention. However, after I posted a few student portraits, people began to volunteer. By the time finals came around I had more volunteers than I had time for.

TL: Can you talk about the benefit for the person behind the lens? How has this project helped you find a balance in law school?

JS: It keeps me sane. Before law school my entire life revolved around art. I was a ballerina, a dance teacher, a choreographer, and a photographer. I have a pretty severe back injury, which prevents me from dancing as much as I would like to, and I definitely don’t have the time to choreograph and rehearse a new work. Aside from being a patron of the performing arts/Philadelphia dance companies, photography has become the last way for me to participate in the visually creative world. I’ve always loved it, but now it’s more than that. It has become a sort of diary for me – a way to keep track of the wonderful people I meet and the beautiful places I’ve been. It’s expression, documentation, and autonomy. It’s also allowed me to meet some of the upper-level students and people from other sections that I would not have met independently of this project.

TL: Do you have any plans for the project moving forward? Will we see the project continue?

JS: I think this particular project is over. I will most likely start a new project in the fall when I have easy access to everyone again. Someone suggested that I do a similar series that shows off law students’ tattoos as a way of de-stigmatizing some of the connotations that people attach to tattoos, like recklessness and unprofessionalism. I also had the idea to complete an Arnold Newman-type series of Temple Law’s professors, but I haven’t worked up the courage to approach any of the professors.

Thanks to Jessica Stachelrodt for taking the time to speak with us. View her entire series of photos in the gallery below.