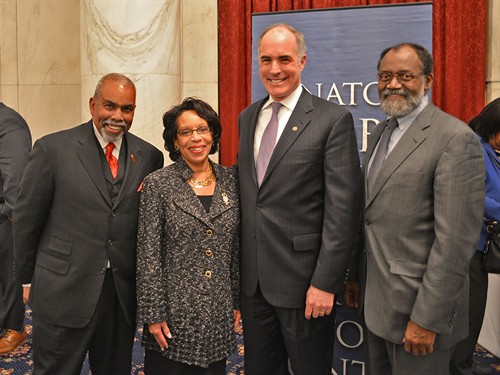 “Today, we honor JoAnne Epps, the Dean of Temple Law School, for her significant work to advance access to justice and for inspiring and empowering new generations of attorneys to emulate her commitment to service, integrity, and passion.” U.S. Senator Bob Casey (D-PA) offered an inspiring tribute to Dean Epps in which he noted her “significant contributions to the Commonwealth of Pennsylvania and to the Nation by promoting opportunity and diversity through our legal institutions.”

The tribute came as part of Senator Casey’s annual observation of Black History Month, and included the Senator’s remarks from the floor of the Senate as well as a Symposium on The Power of Dreams: Opportunities for Women in Education and Law, in which panelists reflected on Dean Epps’ contributions as an attorney and an educator. Members of the Temple Law community as well as Dean Epps’ family were invited to join her in the Senate Gallery for the proceedings. Previous honorees have included such luminaries as Leon Sullivan, A. Leon Higginbotham, Jr., and C. Delores Tucker. The Senator’s complete remarks, which were made as part of the Congressional Record, are available here.

“It was really an unbelievable experience,” said Dean Epps. “I felt deeply honored by the Senator’s remarks, and was both humbled and inspired by the presence and complimentary words of so many friends and colleagues. It was both a little surreal and a wonderful affirmation that the time I’ve spent has meant something to people. I’m very grateful.” Dean Epps has offered more reflections from the day on her blog, available here.

The Senator noted Dean Epps’ perseverance in pursuing a career in law despite the lack of available attorney role models to whom she could look for guidance and support. At Yale Law School, she was one of just 40 women and only ten African-Americans in her class. He commended her for using those experiences as inspiration for a lifetime of service and a passion for ensuring that future generations of young lawyers would not face such barriers.

In addition to summarizing the Dean’s many civic and professional leadership roles, Senator Casey offered particular praise to Dean Epps for her vision of a center that would improve access to justice for underserved communities. He commended the Dean on her success in bringing that vision to life as the Sheller Center for Social Justice at Temple University Beasley School of Law, calling the Center’s work “truly inspiring.” He also commended her leadership in “advancing the quality of legal education” through Temple’s outstanding clinical programs and innovative first-year experiential courses, and her personal commitment to empowering “countless young attorneys to exceed expectations and fulfill their dreams.”

Following the Senator’s remarks from the floor, participants and guests joined him in the grand and historic Kennedy Caucus Room, site of the Titanic, McCarthy, and Watergate hearings, to attend a Symposium titled The Power of Dreams: Opportunities for Women in Education and Law, which was moderated by journalist Art Fennell, known for his work on Art Fennell Reports, and featured four distinguished panelists:

After Senator Casey’s opening remarks, Temple University President Neil Theobald also spoke, noting not only the “long and distinguished list… of Dean Epps’ contributions to the community” but her “ability to touch the lives of our students and set them on paths to new careers and better lives.” As proof, President Theobald recounted stories told to him by current and former Temple Law students of the difference Dean Epps had made in their lives through her kindness and personal connection to them. The President affirmed that this was consistent with his experience of the Dean when he said, “That perfectly captures the woman I have come to know and respect: she’s happy to do all the work to empower her students, but she wants none of the credit.”

The panelists reflected on Dean Epps’ many contributions to advancing opportunities for women in both professions. Crystal Brown echoed President Theobald’s remarks, citing Dean Epps’ mentorship as a source of her own personal inspiration, while Chief Judge McKee noted the Dean’s role as a visionary, an observation shared by Bobbi Liebenberg. Liebenberg, who has served as Chair of both the American Bar Association’s and the Pennsylvania Bar Association’s Commission on Women in the Profession, also placed Dean Epps’ work toward creating more opportunities for women and people of color within the context of her larger pursuit of social justice and equality. Liebenberg praised the Dean for her ability to both mentor through personal connection and teach on a global stage, citing her “enduring legacy of helping countless others fulfill their dreams and realize their full potential, regardless of their gender or race.” She concluded by calling Dean Epps “an important catalyst for change (who) has helped to make the world a better place.”

The evening concluded with a reception, hosted by Senator Casey and also held in the Kennedy Caucus Room, in celebration of Dean Epps’ record of service and historic contributions, not just to the legal profession, but to the Commonwealth of Pennsylvania and the nation.