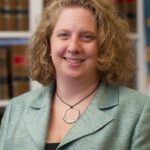 The award, given annually by Stetson Law, honors “an individual whose life displays sterling character, coupled with ongoing dedication to the highest standards of the legal profession and the rule of law. The award is designed to recognize a trial team coach and program director who exemplifies the late Professor Ohlbaum’s commitment to doing things with a high degree of professionalism, integrity, and competency.” Professor Ohlbaum led the trial advocacy programs at Temple Law from 1989 until his death in 2014.

Professor Jules Epstein, who now directs Temple Law’s advocacy programs, lauded Jacobson’s selection. “Professor Jacobson embodies all Eddie was and taught – excellence in advocacy, professionalism in advocacy, and mastery of the law surrounding advocacy,” he remarked. “She lives and breathes trial advocacy – her office is filled with students for skill- and confidence-building; she finds them jobs; she keeps alive our alumni network; she creates new trial files and updates our curriculum; and she is a presence locally, regionally, nationally, and internationally.”

“This award is really special to me,” said Professor Jacobson. “Eddie Ohlbaum was a mentor, colleague, and friend, and he cared deeply about Trial Advocacy and our National Trial Team. To be honored by the Trial Advocacy community at the Educating Advocates: Teaching Advocacy Skills Conference (EATS) at Stetson, with an award named in Eddie’s honor means the world.”

In addition to her trial advocacy work, Stetson specifically praised Jacobson for her “dedication and quality character (which) shine through in all that she does, but most evidently, as a tireless advocate for diversity and inclusion. “Professor Jacobson is the conscience of our community, our most consistent and persistent voice for diversity, inclusion, and tolerance,” said Professor Epstein. Noting that Jacobson is the co-chair of the Dean’s Advisory Council on Diversity and Inclusion at Temple Law, he also praised her extensive, and ongoing, commitment to service outside of the law school, remarking that “Professor Jacobson’s entire life is devoted to public interest – she trains public interest lawyers, represents juvenile lifers, trains public defenders, serves on Pennsylvania’s Evidence Rules Committee, and volunteers for the ACLU.”

Epstein found the award particularly meaningful given Professor Jacobson’s connection to Ohlbaum. “Professor Jacobson was Eddie’s last associate, and supported him through his illness to help keep his dream alive,” said Epstein. “She is the person we turn to when we ask, ‘what would Eddie do?’.”

The award has had personal significance for Jacobson as well. “When Eddie died, the idea of carrying on his legacy of advocacy excellence here at Temple felt daunting,” she said. “I’ve worked every day to try to do so. Getting this award from this community, a community that cares as much about Trial Ad as Eddie did, tells me that in some small way, I’ve done that. I am humbled and honored by the recognition.”