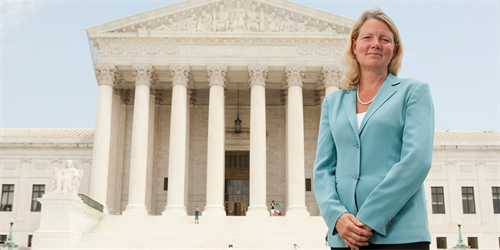 The American Law Institute has selected Professor Laura E. Little to serve as an Associate Reporter for the Restatement of the Law Third, Conflict of Laws. Little will work in collaboration with Kermit Roosevelt III of the University of Pennsylvania School of Law and Christopher A. Whytock of the University of California Irvine School of Law. Reporters and Associate Reporters are typically distinguished academics with a deep knowledge of the field, chosen for their drafting and analytical abilities.

The American Law Institute reports that the Third Restatement of Conflict of Laws will be similar to its predecessors in structure and coverage. Its choice-of-law sections will cover torts, property, contract, business organizations, family law and other status questions, and trusts and estates. The Restatement will also cover distinctive choice-of-law issues-the nature of the choice-of-law problem, whether different state or national laws can govern different issues, and what use to make of the choice-of-law rules of other jurisdictions.

Professor Little serves as the Charles Klein Professor of Law and Government and Senior Advisor to the Dean. She specializes in federal courts, conflict of laws, and constitutional law and is the author of a sole-authored casebook, Conflict of  Laws (Aspen Wolters Kluwer 2013), among many other books and articles.

The American Law Institute is the leading independent organization in the United States producing scholarly work to clarify, modernize, and improve the law. The ALI drafts, discusses, revises, and publishes Restatements of the Law, model statutes, and principles of law that are enormously influential in the courts and legislatures, as well as in legal scholarship and education.

By participating in the Institute’s work, its distinguished members have the opportunity to influence the development of the law in both existing and emerging areas, to work with other eminent lawyers, judges, and academics, to give back to a profession to which they are deeply dedicated, and to contribute to the public good.