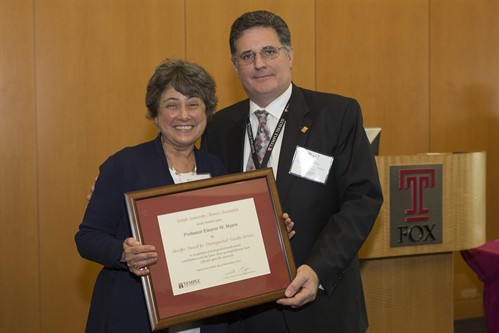 The Temple University Alumni Association has honored Professor Eleanor Myers with the 2014 Stauffer Award for Distinguished Faculty Service, recognizing her exemplary contributions to the University, the Beasley School of Law, and the Department of Athletics.

In presenting the award, TUAA President-Elect Paul Curcillo remarked upon Professor Myers’ reputation as “a consummate mentor, lawyer, supporter, teacher and friend” and noted her tireless efforts at the law school, where she specializes in Professional Responsibility and Transactional Skills development, providing law students and graduates ongoing support with client counseling, ethical dilemmas in practice and professional development. He also commended Professor Myers for serving as a strong advocate for first-year law students as they transition to law school and for her commitment to assisting new graduates in a competitive job market.

Professor Myers was appointed by Temple president Ann Weaver Hart in 2006 as the faculty representative to the NCAA, and charged with ensuring Temple’s compliance with NCAA regulations and the academic success of student athletes. In this critically important role, she oversaw the NCAA recertification effort in 2008-2009, a comprehensive self-study required of the University for that site visit. Professor Myers has been so well regarded in this NCAA role that she was selected to the Division 1 Committee on Infractions and now serves as Vice Chair.

Professor Myers was also appointed by acting president Richard Englert in 2012 to the Special Task Force on Integrity. Chaired by Beasley School of Law Dean JoAnne A. Epps, this task force made recommendations to the President and Board of Trustees on improvements to Temple’s procedures for protecting minors on campus. She is a prior recipient of the temple University Lindback Award for excellence in teaching and a co-recipient with Professor Nancy J. Knauer of the CPR Institute for Dispute Resolution Award for Problem Solving in the Legal Curriculum.

The Stauffer Award endowed fund was created in 1973 by Joan Willson, in honor of her late husband, Dr. Herbert Stauffer, and his father, Milton Stauffer.  The award carries a cash prize and recognizes outstanding faculty service that extends beyond the classroom and University community.