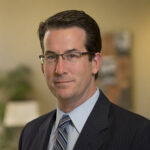 International law professor Duncan Hollis’s unique blend of academic scholarship and global advocacy has given him an influential voice on the world stage, where he is a leading authority on two complex, critically relevant topics: treaties and cybernorms. Currently serving the final year of a four-year term as the US representative to the Inter-American Juridical Committee of the Organization of American States (OAS), Hollis’ work for that organization has caught the attention of the United Nations, the International Committee of the Red Cross, and leaders in several nations.

The OAS
The Inter-American Juridical Committee is one of the principal organs of the OAS, an assembly of North and South American states that collaborates on regional issues. While Hollis, who was nominated for the post by the Obama administration, serves in his personal capacity, the role both draws on and informs his academic work. “I was elected for my knowledge of treaties and cybernorms,” Hollis said, “but the work we’re doing on state views on international law in cyberspace is also feeding my research.” He says that the overlap between scholarship and policymaking is not uncommon to international law: “International law has a special place for publicists – academics who focus on state behavior. It really feeds into that tradition.” He explains that “International organizations can contribute to the stability of the system and development of law, and international law scholars can actually participate in the production of international law.”

For Hollis, that overlap has given him the opportunity to serve as Rapporteur on two vital initiatives of the Inter-American Juridical Committee: drafting a set of “Guidelines” for nation states to use in distinguishing binding and non-binding agreements and a separate project asking States to present their official views on the application of international law to state cyber operations. Both have garnered international attention.

Binding and non-Binding Agreements
“This project was requested by several OAS member states seeking guidance on how to differentiate among different types of international agreements and to devise some best practices for the rising use of political commitments and agreements among government ministries and sub-national territorial units,” Hollis explains. The issue giving rise to the request was the proliferation of new, non-binding agreements, MOUs, and political deals executed by smaller province and regions. How should or could Member States deal with them? Who had the capacity to make them? What procedures should be required to authorize their conclusion? Could a common framework promote clarity and transparency?

As Rapporteur, Hollis led the effort to resolve these questions by developing guidelines that could group international agreements into categories, binding v. non-binding. For those that were binding, they might be binding under domestic law (for example, contract law) or international law (as a treaty). His guidelines offer advice to Member States on questions about who has the capacity to make which types of agreements, what procedures can (or should) exist to authorize these agreements, and what legal effects they have. Professor Hollis’ work garnered attention at the United Nations and he was invited to present it to the annual meeting of legal advisors for all member states. There, he reports, “I got a lot of feedback, including replies from OAS members, so I both presented research and received information.” He explains that experience led to other opportunities: “I invited to present my work at a Colombia/Canada hosted conference on the Vienna Convention on the Law of Treaties as well, and a number of countries outside the OAS region, including Finland and Germany, have asked me to keep them in the loop on this work as they hope it may assist their own policies and practices.”

Transparency in the Application of International Law to State Cyber Operations
The question of whether and how international law applies in cyberspace has defied resolution for some time, explains Hollis. Talks hosted by the United Nations broke down in 2017 and have bifurcated into competing processes today. Efforts to develop a treatise were dismissed by states as “just academic.” As Rapporteur for this new initiative, Hollis developed a questionnaire that the OAS distributed to its member states, seeking their perspective on the issue. “This is mostly just about transparency – an opportunity for states to express their understanding, and for us to gauge their knowledge base on both international law and cybersecurity,” explains Hollis. “Organizations like the OAS need to do more to get government officials up to speed on these issues before they can shape the law as it goes forward. Our emphasis has been on capacity-building, to give them the ability to do that.” The United Nations has expressed interest in this work as well, inviting Hollis to participate in meetings of the Open Ended Working Group on Information Security and various other international organizations have asked to be kept in the loop as well.