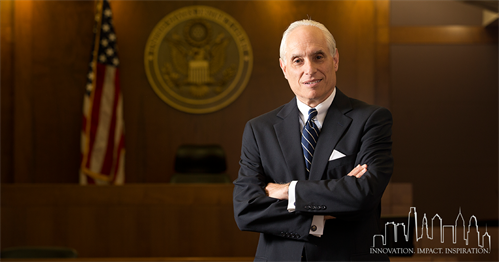 Dean JoAnne A. Epps has announced that David Sonenshein, Jack E. Feinberg Professor of Litigation, will serve as the interim Director of Advocacy Programs.

“For 30 years, David Sonenshein has been a pillar of the trial advocacy program at Temple Law,” says Dean Epps. “In addition to his nationally known work as an expert on Evidence, David has been instrumental in building the trial advocacy curriculum and making it what it is today. The program could not be in better hands.”

“I’m honored by Dean Epps’ faith in me,” remarked Sonenshein, “and by the opportunity to serve the Law School in this role. But the program isn’t just in my hands. Temple Law has an outstanding advocacy faculty, including my longtime colleagues Anthony Bocchino and Lou Natali, Dean Epps herself, and our newest addition from the U.S. Attorney’s office, Lauren Ouziel. I couldn’t ask for a better team as we move forward with the advocacy program at Temple Law.”

In addition to the full-time faculty, Sonenshein will have the support of Temple Law’s spectacular roster of adjunct faculty, which includes federal judges and seasoned lawyers from private firms, district attorneys’ offices, and defender associations across the region. He will also work closely with accomplished program directors Sara Jacobson (J.D. trial advocacy program), Barbara Ashcroft (LL. M. in Trial Advocacy program), and Jen Bretschneider (Experiential Programs) and with Herb Kolsby, who helped to establish the LL.M. in Trial Advocacy and continues to teach in the advocacy program.

Sonenshein replaces the longtime director, Edward D. Ohlbaum, who passed away in March 2014. Ohlbaum, who headed the program from 1989 until his untimely death, is also credited with launching the national championship Trial Team and founding the nation’s first LL.M. in Trial Advocacy program. During Ohlbaum’s tenure, Temple Law became a national presence in Trial Advocacy, and for twenty years has been consistently ranked in the top three schools in the country for trial advocacy by U.S. News and World Report.

The programs Sonenshein will lead include both the J.D. and LL.M. advocacy curricula, as well as the vast array of external clinical courses and experiential opportunities offered at the Law School. Sonenshein anticipates building on current areas of excellence while expanding other areas to reflect the changing landscape of legal practice.

Temple Law’s current curriculum in advocacy includes not only Introduction to Trial Advocacy, the Integrated Trial Advocacy Program, and the Advanced Advocacy courses, but also courses in arbitration, mediation, negotiation, and client counseling as well as the innovative first-year courses Litigation Basics and Introduction to Transactional Skills.

“While we have been a leader in Trial Advocacy for many years, we plan to enhance our offerings in the skills required in other forms of dispute resolution both inside and outside the litigation process,” Sonenshein explains. “Even in the context of litigation, we recognize that the vast majority of disputes are settled outside of trial, and that these processes require specialized advocacy skills.” “We’re committed to teaching our students those skills with the same demand for excellence on which Professor Ohlbaum built the original trial advocacy curriculum.”  .

The co-author of more than ten books on Evidence, including Principles of Evidence with the late Irving Younger, Sonenshein has performed training in trial advocacy at America’s premier law firms and government agencies, including the U.S. Department of Justice. For almost 25 years, he has conducted training in evidence for recently confirmed federal judges at the Federal Judicial Center. One recent training, which Sonenshein conducted for the Federal Judicial Center as an online evidence webinar, reached an audience of approximately 1200 viewers at 400 sites around the U.S.-among the largest online audiences ever, according to the FJC.