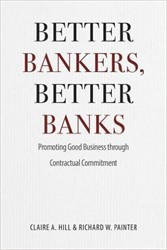 Temple Law School was proud to host Professor Claire Hill from the University of Minnesota as the speaker for the inaugural Kohn Occasional on November 5, 2015.

Professor Hill, who holds the James L. Krusemark Chair at the University of Minnesota Law School, discussed her recently published book (coauthored with Richard Painter), Better Bankers, Better Banks.  The book provides an original and provocative approach to what many fear is fundamental failure in the regulation of large financial institutions.

Rather than focusing on greater firm-based regulation, as is common in works on financial-firm failures, Hill and Painter argue that the real problem is the ethos among bankers, which encourages excessive risk-taking and self-dealing.  A better approach would encourage “covenant banking,” whereby bankers are persuaded to assume a certain amount of personal liability for their firm’s insolvency or wrongdoing.  This, they argue, would better align incentives in financial services, while still permitting flexibility and innovation.

Kohn Occasionals are, as the name suggests, occasional programs at the Temple University Beasley School of Law on business law and related subjects.  Kohn Occasionals are supported by the Harold E. Kohn Chair in Law which is, in turn, made possible through the generous contributions of Joseph Kohn and Leonard Barrack. The Kohn Chair is held by Professor Jonathan C. Lipson.