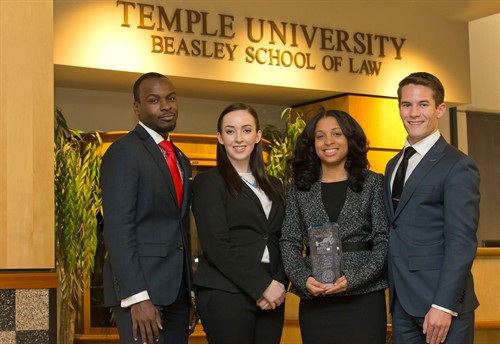 The Temple Law School National Trial Team turned in a stellar performance at the Puerto Rico Trial Advocacy Competition, besting thirteen other teams to claim the championship for the second time in the past four years.

Team members R. Ian Evans, Katelyn Hutchison, Dominique Moore, and Joel Michel, all third-year law students, dominated, beating Yale Law School in the Semi-Final Round and Barry University in the Final Round. In addition to the team victory, Michel was named Best Advocate, and three of the four – Michel, Evans, and Hutchison – received perfect scores from the judges, with Michel and Evans doing so twice.

“I could not be more proud of this team,” said Professor Jen Bretschneider, who coached the team together with Adjunct Professor Maureen McCartney. “They are all exceptionally talented advocates, and to see their hard work and commitment pay off with a performance like this fills me with excitement for each of them.”

Dean JoAnne Epps, who heard about the victory while visiting Temple Law’s program in Beijing, was thrilled by the news. “Our team members are very skilled advocates,” she said. “It is gratifying to see their talents and hard work recognized in this way.” Dean Epps also expressed particular delight in Joel Michel’s award for Best Advocate. “Joel represents the best of Temple Law School,” she remarked. “He is an outstanding advocate. He has committed himself to excellence in his coursework and on the National Trial Team, and has let his talent, integrity, and passion carry him to new heights. I am delighted for him at this well-deserved recognition.” To read more about Michel’s commitment to advocacy, click  here.