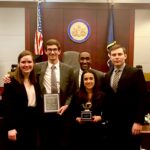 Temple was represented by two teams: 3Ls Izabella Babchinetskaya and Dylan Smith; and 3L Gregory Dachko with 2Ls Eric Love and Justin White. They competed in a field of twenty teams from the region. In addition to finalist honors, Dachko also took home the Ohlbaum Award for Best Advocate in his final round.

Director of Advocacy Programs Jules Epstein had high praise for the teams: “Their performances and professionalism were exemplary to the point that one of the students was offered a judicial clerkship position after a presiding judge saw her skills,” Epstein said. “They also drew praise from some of the top lawyers in this region …. They are among Temple’s best.”