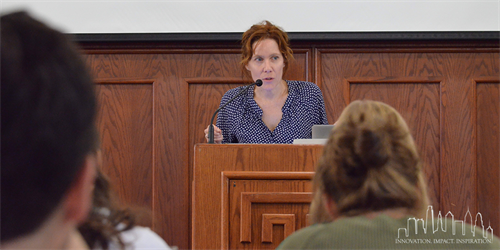 If Nancy Updike, award-winning producer of This American Life, had one message for her Dean’s Forum audience it was this:  in lawyering as in journalism, success lies in making people care.  “People are busy,” Updike explained.  “Just because I decide something is important doesn’t mean they will care.”

Updike discussed two basic techniques that she uses to craft the stories she tells on This American Life: setting the scene and showing, rather than telling, whenever possible.  Using clips from around the world, Updike demonstrated how good storytellers set the scene in a way that both conveys contextual information and “drags the listener into caring.”  They select scenes that are engaging, memorable, and revealing, even if it means revealing parts of themselves.  And above all, they care – enough to listen, to show interest, to ask questions beyond what they had prepared.  “My test for what’s compelling is simple,” Updike explained.  “What interests me enough to tell other people about it?”

Updike offered a powerful example of her second technique, first playing a clip of an international authority discussing the future of Iraq in 2010 and then comparing it to one of civilian Iraqis sharing stories of the violence and fear that continued to shape their daily lives.  When asked how she “finds the story in the facts,” Updike replied that the most effective method is simply to “listen,” explaining that “if you show you’re interested, from there you get to put together a story that will make people care.”