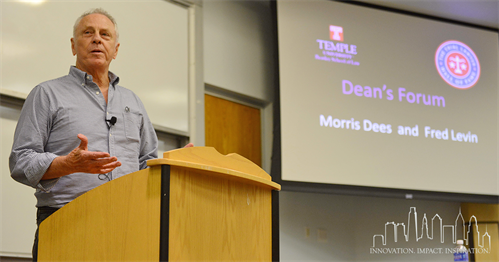 Speaking to a packed auditorium, Dees touched on several points, noting first that the right to a jury trial in this country preceded even the drafting of the Constitution, and was considered an essential element in the defense against tyranny and the establishment of the rule of law.

After remarking on the continued threat of contemporary tyrants – a criminal justice system that imprisons and sometimes executes innocent persons; a corporate culture that elevates profit over people; and predators willing to exploit the most vulnerable among us – Dees challenged the students in the audience to stand up for people who have very few champions.  Dees reinforced his point with an often misquoted passage from Shakespeare’s Henry VI – “If tyranny is to prevail, you must first kill all the lawyers.”

Noting that for those who take up his challenge, compensation won’t be measured by the size of their bank accounts, but by the lives of the people they’ve helped, Dees shared stories of those he has represented as part of his work at the Southern Poverty Law Center.

In concluding his remarks, Dees admonished the students – in fact, every lawyer – in the audience:  “It is up to you to think about the legacy that’s been handed down to you when you get a law degree.  We need lawyers who understand that America is run by the rule of law – not by judges, not by the Federalist Society.  It is up to you.  You hold the key to the gates of justice.”

Dees offered his remarks in connection to the opening of the National Trial Lawyers Hall of Fame, located in newly renovated space on the second floor of Klein Hall.  The Hall of Fame was established by The National Trial Lawyers Association and Trial Lawyers, Inc. “to honor trial lawyers who have left an indelible mark on the American legal tradition through a lifetime of service to the American public, the Constitution and the American trial bar.” Visitors can see portraits of and hear taped interviews with the 39 lawyers inducted since its founding, including Mr. Dees, Thurgood Marshall (U.S. Supreme Court Justice), Clarence Darrow (American Civil Liberties Union lawyer) and Johnnie Cochran Jr. (who successfully defended O.J. Simpson).