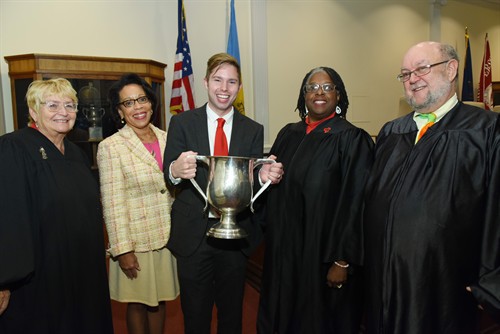 Of the 12, selected for the strength of their written briefs and their oral argument in the preliminary rounds, eight competed in a semi-final round of oral arguments and four in a final round. At the conclusion of the final round, 2L James Shygelski was named Champion, while 2L Amanda Capaldi took second place. The entire class of incoming Honor Society members includes:

The 2015 Polsky Competition problem, written by current Moot Court Honor Society members Nicole Falgoust and Shanna Miles, required the competitors to brief and argue whether a private university that received federal funding engaged in unlawful discrimination under Title IX of the Education Amendments Act of 1972 when it prohibited a transgender student from using the sex-segregated facilities that matched that student’s gender identity. The problem was based on fictional events.

Watch the Final Round