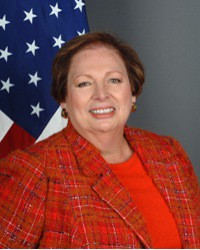 Mari Carmen Aponte ’75 was confirmed as Ambassador to El Salvador on June 14, 2012. Ambassador Aponte had been serving in the role under a recess appointment since August 19, 2011. President Obama originally nominated her to the post in December 2009.

Before assuming the position of U.S. Ambassador to El Salvador, Mari Carmen Aponte worked as an attorney and consultant with Aponte Consulting, and served on the Board of Directors of Oriental Financial Group.  From 2001-2004, Ms. Aponte was the Executive Director of the Puerto Rican Federal Affairs Administration.

Prior to that, she practiced law in Washington D.C. for nearly twenty years.  Ms. Aponte has served as a member of the Board of Directors of the National Council of La Raza, the Puerto Rican Legal Defense and Education Fund, and the University of the District of Columbia.  She was a member of the Board of Rosemont College, and served as president of the Hispanic National Bar Association; the Hispanic Bar Association of the District of Columbia; and as a member of the District of Columbia Judicial Nominations Commission.  In 1979, as a White House Fellow, Ms. Aponte was Special Assistant to United States Housing and Urban Development Secretary Moon Landrieu.  Ms. Aponte has a B.A. in Political Science from Rosemont College, an M.A. in Theatre from Villanova University, and a J.D. from Temple University.